Publish your comic
.Share your comic
with 126524 members!
Learn more... 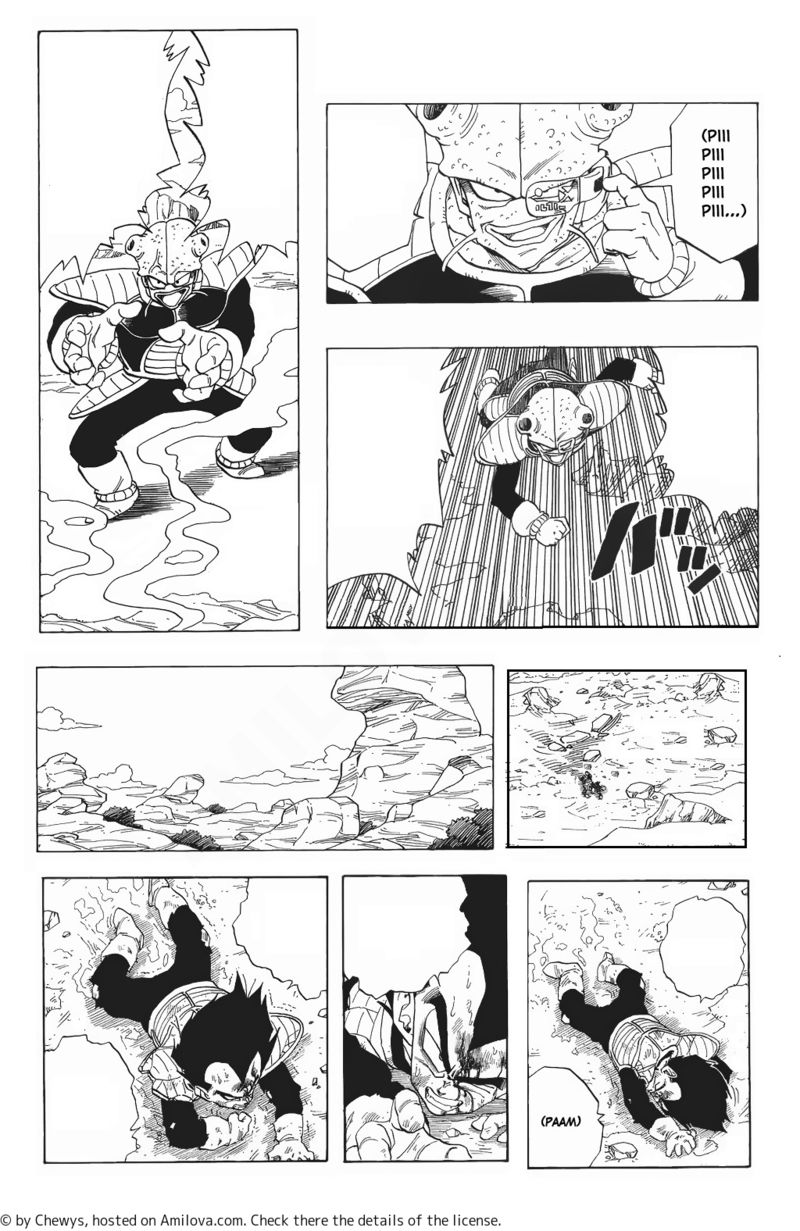 If Vegeta somehow recovers from this...
Then the earthlings will face off against a Vegeta who's even stronger than the one that fought Goku.

Good god, this is amazing =D

yeah but could he recover that's the whole question

Which is more interesting:

Kiwi killing Vegeta and taking his place in the saga.
or
Vegeta recovering from near death, receving a zenkai, and the earthlings having to fight a Vegeta stronger than the one who crushed Goku in the manga.

I have no idea how he can recover from this. His best bet would be to make a retreat toward his space pod using the remote to make the pod come to him. But that would mean retreating.

He wouldn't know if the Dragon Balls are real.
He'd be facing treason charges at home as soon as Kiwi (and thus Cooler) finds out the Dragonballs ARE real.

What other way is there? Well he could get a senzu bean, but how on Earth would that happen, and besides, he's unconscious right now and near death.

The only reason I'm assuming he recovers from this is because him recovering is the scenario I find the most interesting. Kiwi replacing Vegeta isn't interesting to me. But Kiwi as an additional hurdle for the Earthlings (or Vegeta) to overcome? Hell yeah!

well the pod only has an emergency kit to keep him alive. In the original manga he was healed arrived on the base

I would love if it happens like: they gather the Dragon Balls and ask to revive all the ones who died by the aliens.
They wouldn't know that it means Vegeta coming back (since they don't know what happened to him) and that would make Vegeta realize the the Dragon Balls exist.

we never imagined the real way he could recover at the end :p

i guess vegeta is just temporary KO
kiwi will go and toy with napa, slowly killing him.
when he will start to have fun with earthlings vegeta will wake up and see the moon (on this universe there is no picolo who destroyed it) and his oozaru power up could bring him again to a kiwi like level.
both could continue fighting, for them earthlings are weaklings that are no treat at all, so they will not focus on them anymore;
they will fight kiwi loosing but trying multiple time to cut his tail... before dieing saying that if he had managed to cut that damn tail he would win.
Then a yajirobe cutting that damn tail :P
and vegeta very exausted fighting the Z team, he may be stronger than nappa but so much exausted that in the end he will lose

I think Vegeta will recover. U9 Krilin knows him (see page 150) "I know your Sayan friend" and so he must have fought him. (Of course he has already seen him, but I think he must have known what is capable of).
Well, we shall see. Perhaps Vegeta will "help" them by defeating Kiwi... and then betray them. Also, I wonder when Coola and Sauza will show up. On the Earth? on Namek? Somewhere else?

That´s right. An alliance between earthlings and saiyans against Cooler and his forces sounds good. Vegeta hasn´t place for run out, so I expect the battle here, on Earth.

Well technically the first panel with Vegeta, Nappa and Saibamen never happened that way with Nappa sprouting the Saibamen only after Vegeta already flew away to deal with Cui. So you basing all your info in the trailer is not entirely accurate. Chewys put the trailer out there for ppl to get excited but that doesn't mean what you see in the trailer is what is actually going to happen. Movie trailers do that all the time. You watch a trailer for a movie and at the end you think you have a basic idea of what it will be about. Only after seeing the movie do you often find that some scenes in the trailer never appeared in the actual movie or that the apparent villain in the trailer, actually turns out to be a protagonist and/or visa versa. Regardless, I think Vegeta NEEDS to survive the battle of Earth and be that reoccurring villain that we all love to hate and the ultimate thorn in the earthlings side. P.S I hope my DBZ fam is staying safe and healthy in these trying times. Sending positive vibes all around

Yes friend, i know that! What I mean is that Vegeta is going to survive. Even if it doesn't happen exactly like the "trailer", it will happen. Example: "That did not happen with Nappa Vegeta and Saibaimans", But Vegeta gives the order before flying, and Nappa "creates" the Saibaimans.. You see? That's why I said that.

Vegeta is seriously injured. THEY [sayajins] WILL have to appeal to an Artificial Moon and transformation, I just wonder if the Kiwi will help the Earthlings after the beating on the Sayajins, I still don't know if Vegeta will be able to escape here or die, but he is not donkey, not a coward, I believe that he (VEGETA) will transform when he sees the natural MOON (there is no Piccolo here) after all it is still there. I would like to see Kiwi joining Earthlings here, it would be nice to see him helping, it may be that Kiwi is forced to fight alongside the Z, even temporarily, I don't think Kiwi is different from Vegeta and most other henchmen, just be the Demons of the Cold out of fear.

Spare Vegeta?
What a mistake.