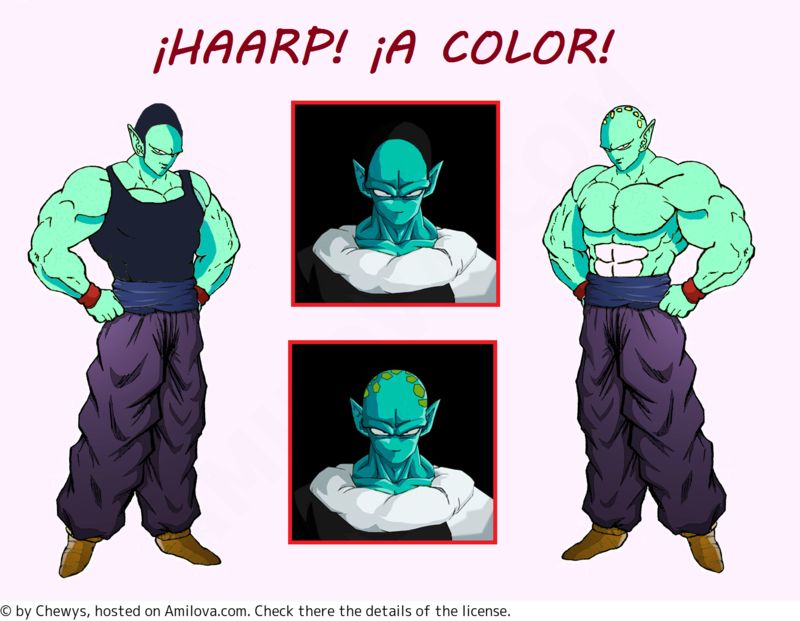 Today i present you... a fully colored Haarp!!!

Original art from Eggyman, on Deviantart!

Uffff.... this took soooooo much comings and goings....

Boom can give faith of thar

The end result looks great though, it brings out the demon part quite well, he's not a normal namekian after all.

Just like everything else, Haarp does it his own way

I wonder what daddy thinks of him now. His "dissapointment" has surpassed him, conned a god with his harem to get out of hell, called another god a fat animal to his face, came back from the dead and is now casually threatening space aliens tens of times stronger than daddy. Honestly Haarp just keeps winning at life.

Yeah... And to think I originally intended him to get killed by Raditz and never be heard of again...

Hey, Vegeta was originally suposed to die on Namek (and stay dead) and look how that turned out. Stories grow in the making

I'm so glad that you didn't decide to kill off Haarp. He is a really cool character and he has a great personality.

Nice, is he the same race as Garlick junior?

He is a Spawn of Piccolo... Don't know what race Garlick is, but he totally could hace bien spawned by Piccolo in his first years... Por even the original Namek.

I guess he is just a demoniac version of nameks. So he is parte namek and part demon.

That makes sense, thanks.

I prefer to think of the Demon Race of Namekians as mutated Namekians that were mutated by the evil that corrupted their father.

I prefer to think of it as them being a result of Kami and Piccolo being 1 soul that split into 2. That's not something that's supposed to happen. Thus it affected their offspring.

Thugh, as Haarp has clearly demonstrated, that's not necessarily a bad thing

I don't know, I buy into the "your soul was split into 2 and that has its side effects more than the, you're not a goodie 2 shoes so now your children are ugly argument.

That would also explain why their power dropped so drasticly when they split, splitting your soul takes a lot out of you. I wouldn't be suprised if many would die from the attempt. And Kami/the original namek only succeeded because he was so insanely powerful his soul actually survied being torn appart. I mean, Guru was convinced the original namek would have destroyed Frieza

But that's just my theory.

Okay I do gotta say that I like your take on it.

Haarp is the coolest original character from U9. A pity that he isn't on the Multiverse Tournament.

Wow, Haarp looks fantastic Chewys! I never thought of him as being turquoise colored, he looks so cool. Thank you for listening to my request!

Haarp really did some good weight lifting on King Kai's planet. He is HUGE! Piccolo Jr. looks tiny in comparison to him.

He is the Demon Prince, Haarp!

The end result looks great though, it brings out the demon part quite well, he's not a normal namekian after all.