Signup for free
Read over 1374 comics
Get custom suggestions!
Participate to the community! 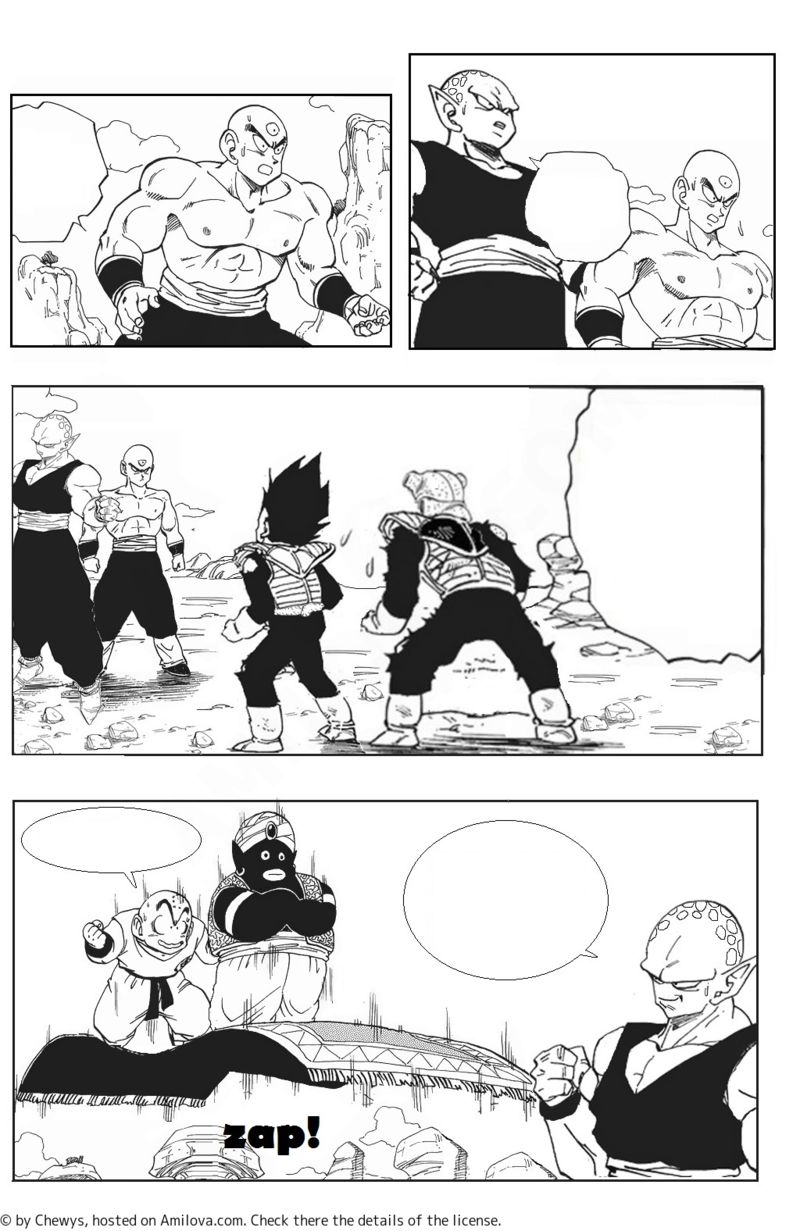 Hello readers!
If you want to support this project (your help is really appreciated):

There you can see pages in advance, and some exlusive artwork and "behind the scenes"

Thank you for everything!!!

Each time Kiwi spoke, someone appear

Things are not going according to Kiwi´s plans

Chewys, I see you're drawing out the reveal of whether or not Vegeta will kill Kiwi before fighting the Z Fighters or plans on doing it after. Honestly I still think he'll doing it before fighting them as with a Zenkai boost and the ability to go Oozaru, I think Vegeta will be enough to make the fight challenging. Vegeta and Kiwi might just be a little too much for them to handle when you take into consideration Oozaru Vegeta after the Zenkai boost he obviously received after eating that Senzu Bean.

Judging by their reaction to Vegeta's ki after receiving his Zenkai, I think Vegeta will give Kiwi a much deserved beating. He was already about to kill him on the last page before Kiwi interrupted that the four Z-Fighters nearly defeated him.

Vegeta might be confident in his abilities after his newly acquired power. However, is he able to read the ki of the Earthlings? We will see?

Everything will depend on Vegeta here, he is not sure what to do, he will probably go as you said to assess the fighting power of his opponents, he does not know how to feel the KI and he does not even have a Scouter WITH him, which makes it difficult, he however it is not stupid, if the transmission of his and Nappa's conversation was captured by Kiwi, and obviously other members of the army also captured it.

And again, he already has a confirmation of the existence of the dragon balls and his power. To make matters worse, it is almost certain that more soldiers will arrive at any moment.

Vegeta has three options, first; to ally with Kiwi and try to buy time until an opportunity to kill the sponge and then look for information from the spheres (but, he must have a live Z). Second; kill the Kiwi right away and threaten and at the same time negotiate with the Z warriors, telling them that the only way to survive and using those spheres to become immortal, justifying the idea that everyone has immortality as a guarantee that he he will not return to Earth and just wants power to bring down his EMPEROR and take revenge.

Third; run away from the planet and let the Kiwi die, but that will only be possible if Kami-Sama appears and he indirectly knows that the RACE of the Namekuseijins and that you create the spheres and GO to the Namek planet in search of the most powerful spheres.