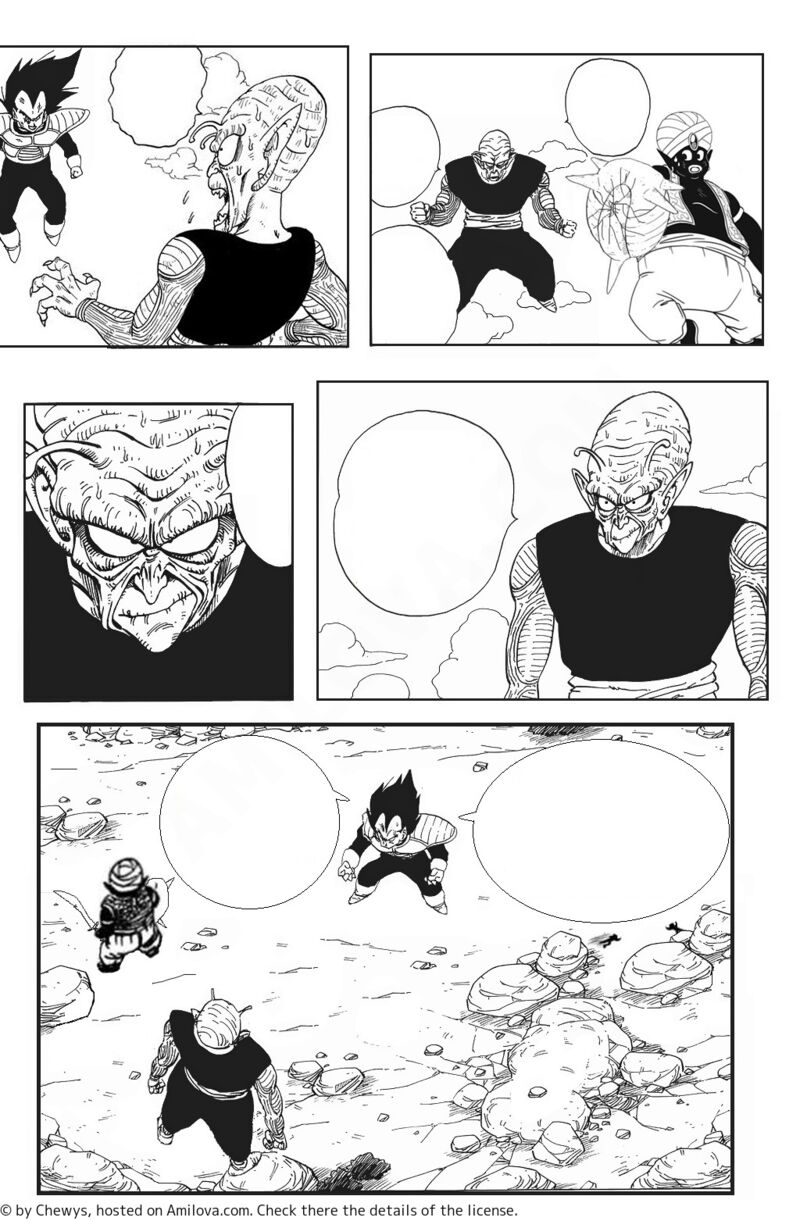 Tien and Haarp with kaiox3 same time could not do anything.Tien cant even keep it for long.Tien kaio3 sneak and grab vegeta from behind and hold him still then krilin kienzan them both to death seems their best bet with no haarp.Doubt they would do that.Suspense of this amazing story is incredible.

with dragon balls around death is just a little time off for them so why not sacrefice one of the warriors to get it over with quickly - they seem to always rush thowards to battle making plans as they are against the wall if at all :/ I guess that's what db is

Heal that man Yamcha! Can't leave the strongest fighter on the ground when the situation is this dire!

Remind me, are there still any intact scouters around here?

Nope! Vegeta destroyed his own scouter, Kiwi ended up Nappa's scouter (Vegeta took it from him so he could interrogate Yamcha and Roshi about the Dragon Balls without Kiwi or Cooler finding out), and Kiwi's scouter got destroyed during his fight with the Z-Fighters.

Although I personally think Cooler will catch wind of the existence of the Dragon Balls. Kiwi did confirm the voice records of Krillin, Tien, Popo and Haarp being the fighters that Raditz killed yet they are alive, which might have notified Cooler's empire if they were listening in to the conversation. However, only Earth should be on the radar for Cooler and not Namek.

Interesting analysis from Vegeta. I had never viewed previously Kami as a catalyst for human evolution. Nice insight

Kami certainly was a catalyst for the humans to get stronger. Maybe not directly, but indirectly through the creation of the Dragon Balls. Without them, the Z-Fighters would have likely never met, and they would have never went on thrilling journeys to find the wish orbs and fight powerful opponents and become stronger on their own.

Yep. And on top of that he was responsable for Piccolo being around, and they having to train and even training them.

Poor Haarp, I feel bad for him in all honesty.

Just when I thought he was going to become an anti-hero, Yamcha has to open his big mouth again and be mean to him! Haarp might not be a good guy, but he is certainly better than the Saiyans or Kiwi.

He doesn't want to conquer all of Earth and destroy all humans, unlike King Piccolo or Piccolo Jr. He just wants to chill out and rule over his own country. Give him another chance, Yamcha!