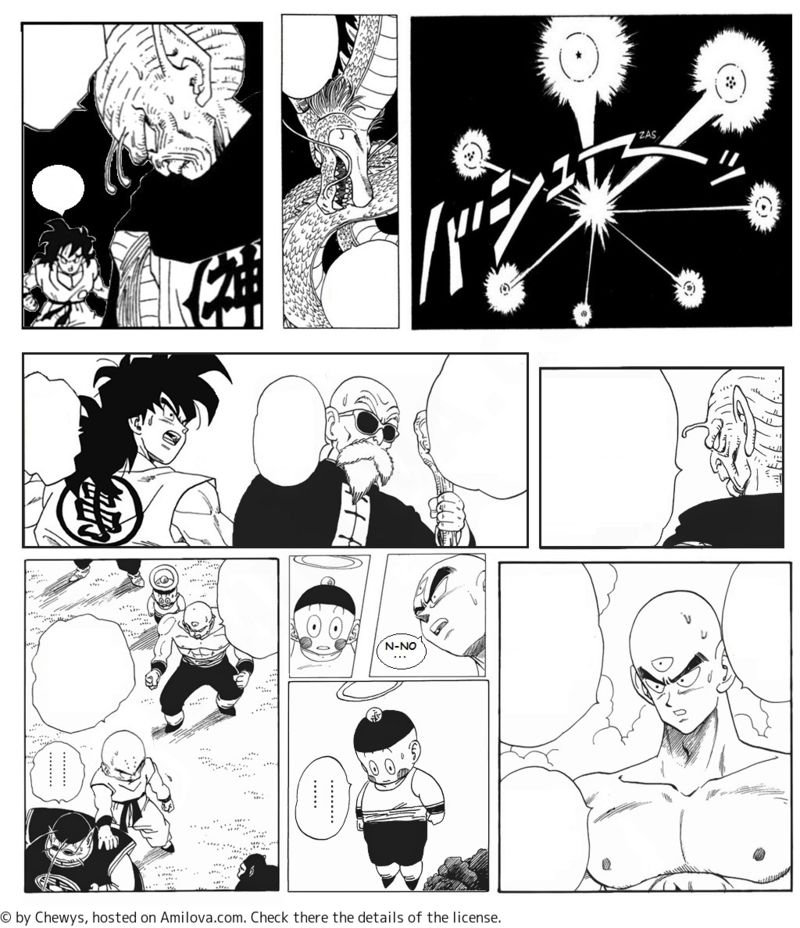 Well, now Chiaotzu will probably convince Tien to go fight the Sayans. I wonder who will die against Nappa and Vegeta... probably at least Master Roshi (to save Crilin's life? And after that Crilin grow his beard and became the Turtle Eremit?

Kami: "I know... I didn't know want to say anything before because I was afraid Tenshinhan wouldn't want to come back if I did... But Chiaotzu and Son Gohan have already been revived by the Dragon Balls..."

Tien: "Well thanks for telling us that now, old man! I'm staying here just to spite you! Screw you!!!"

Chewys, you sure know how to build tension in a story well!

We might be already aware of what’s at stake here, but it’s even worse for U9. Why? Because every Z-Fighter in U9 has died at least once, except for Yamcha and Kami. Unlike U18 where only Goku, Krillin and Chiaotzu had previously died up to the start of the Nappa and Vegeta fight.

Hopefully Chiaotzu will be able to convince Tien to go back to Earth with Krillin and the others. Not all hope is lost for Chiaotzu and Gohan though. At the very least, the possible interaction with Haarp and the Saiyans could spark the revelation of Kami, Piccolo and his offspring to be Namekians. At least it could give the Z-Fighters hope to travel to Namek and find the Namekian Dragon Balls as a backup, as well as having the Namekians be potential allies in the universe. Cooler and his empire are still a huge threat right now.

Thanks for your comments man!

Hahaha! Got to love that Shenron's smile

Shenron: Wish.Fucking.Granted. Erect a monument in my honor!
Everyone: Eh... where is...?
Shenron: Sayonara bitches!!!!