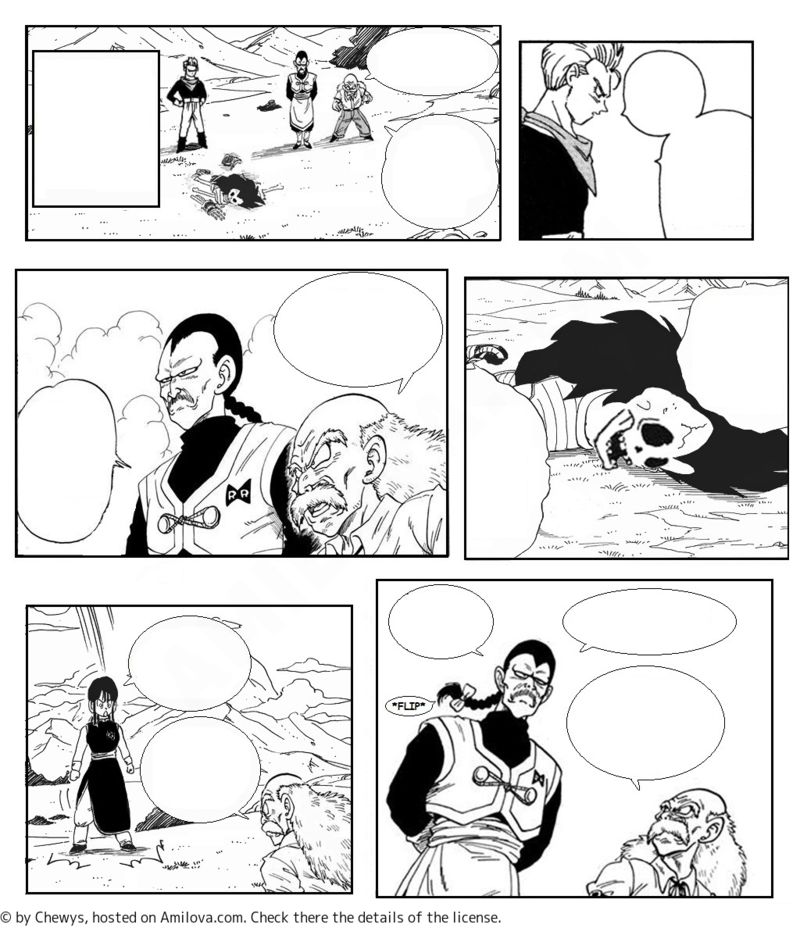 It's really cool how the threat of the androids is being build up here. We see Dr Gero kidnapping people, we see him planning his attack... And the saiyan saga hasn't even started yet!

It's also interesting how Gero's position changes depending on the universe, possible savior of humanity in u3, or child kidnapping vengeful scientist dictator in universe 9

And that Tao Pai Pai design is aweomse!

Who is that man next to Tao Pai Pai and Dr Gero?

Probably general blue. He was the strongest fighter from RR. And the only one who actually beat Goku once.

Since Goku never arrived here, he wasn't executed by Tao Pai Pai in a demonstration after losing the Dragon Balls.

Cheers to you and your families !!!

Wow, Raditz decayed quickly. I always wondered what they did with Raditz's corpse (I wish Gero had made him an android in canon or at least used some of his organs).

Well... actually he decayed normally. It's been more than 8 months since he was killed.

Merry Christmas Chewys and all!!!! May all our DBZ wishes come true!!!

So exciting to see Dr Gero and his gang back!!!

Also, is it possible for them to measure Raditz strength just from his DNA? That would be very useful for the good doctor to set his power levels standards for the next models.

Haha, I guess A-9 didn't escape Gero's wrath after all, RIP

Whoa, I'm late to the party! I love these build-up pages.

Dr. Gero has been a lot more present in U9 than any other shown. So in this universe, most of his cyborgs were people kidnapped and converted into them. We already have Chi-Chi, General Blue and now Mercenary Tao.

It seems like Gero already knew about the battle with Raditz thanks to his spy robots, whom have probably collected more data for Gero to use in building stronger androids. C-13 seems to be completely confident in handling the Z-Fighters from a year prior, who were only around PL 400. Unfortunately for them, they are already training for the Saiyans! They may be outmatched from building androids with obsolete data.

I'm also really curious if Gero's spy drones harvested any of Raditz's DNA to be used in Cell's creation? Goku no longer exists in U9, so it would make sense for Gero's supercomputer to harvest any genetic material he can get his hands on. They likely already have DNA from the humans, King PIccolo, Kami, and now Raditz. Who's to say they won't extract more from future fighters, like Vegeta and Cooler?