Publish your comic
Share your comic
with 124405 members!
Learn more... 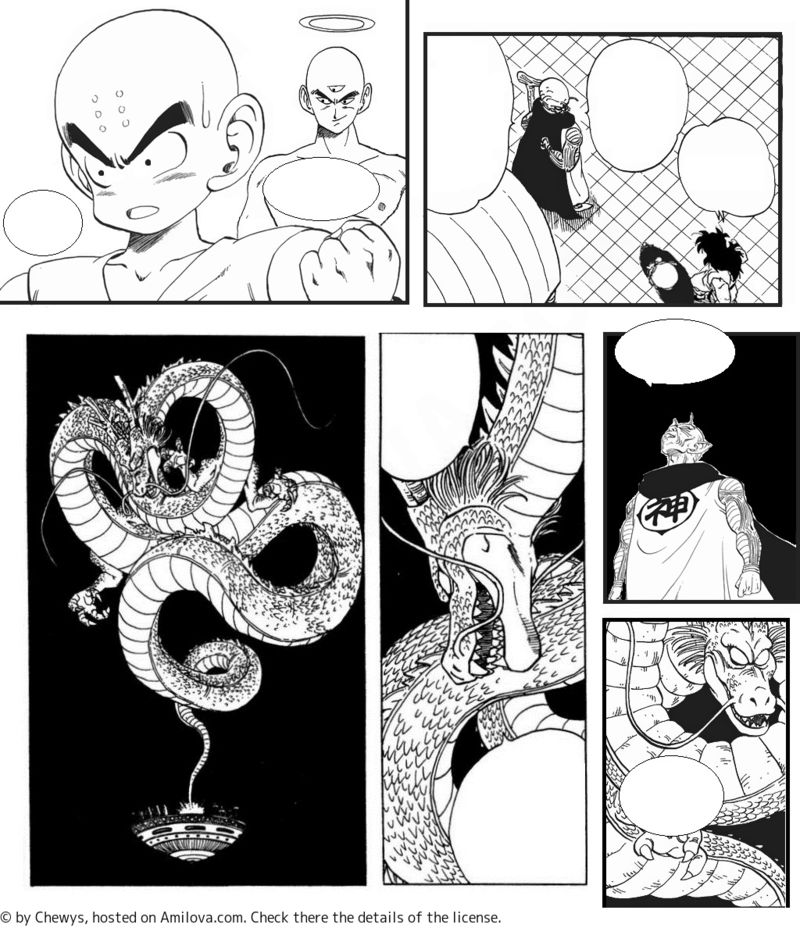 Gohan is STILL on his was

YOU'RE BACK!
I can't explain how happy I was to receive amilova's notification about this.
Hope everything is alright now, Chewys. Here in Italy we are in quarantine, something new to read can help fight the boredom.

I'm glad, it seems we are hours from quarantine here too, so it'll be good to be in touch.

It's a fitting page for the revival of An Earth without Goku. The Earthlings literally get wished back to life along with the story

That wish is much better worded then the original,
the farmer and the animals of the impact are alive to now.

Certainly. Raditz didn't really have much of an impact on the story in U18 overall, except for introducing the plot point of Goku being a Saiyan, and the Saiyans in general.

In U9 we can obviously put that to rest, since he killed nearly all of the Z-Fighters, and not just Goku. In U18, the Z-Fighters weren't aware of anyone else killed by Raditz, but luckily here they took everything into consideration.

Farmer with shotgun must be around in case more aliens invade!!!

Finally, I'm so glad to have U9 come back! It was well worth the wait.

It was very thoughtful of Yamcha and Roshi to gather the Dragon Balls for Kami, since Mr. Popo wasn't around to do that for him.

However, I am concerned though. Gohan and Chiaotzu have already died twice, so Shenron might have a problem with this wish on the next page. Those two might have to stay back in the Other World and live out their afterlives while everyone else gets wished back and leave to fight Vegeta and Nappa.

Maybe the gang will make their way to Namek (like what we saw in last chapter's preview with Mr. Satan and Nail) and use Porunga to wish them back.

Getting wished back as they are now would be pointless anyway. Chiaotzu hasn't mastered the kaioken yet and Gohan hasn't even arrived yet. They would die immediately.

If anything, Gohan can spend his retirement on King Kai's planet. I'm sure they would get along.

That's true... I just realized that Gohan hasn't arrived yet. Did he give up on reaching the end of Snake Way? I don't see why he would. Chiaotzu might take this chance and get stronger on King Kai's planet within the next few months between the battle with Vegeta and possibly being revived by Porunga. I mean, why wouldn't he? Chiaotzu has nothing better to do and to stop being fodder.

As for Gohan, I'm not sure if King Kai has any beautiful brunette women to keep Gohan company on his planet. He may have to look elsewhere for a retirement home...

Gohan is still on his way... and about to arrive anytime now

Grandpa Gohan is still running in the serpent's path, he will not be useful in this fight against the Saiyans now, however, he will be very useful in future fights on the planet namek, after all, he is the one with the purest heart, so that I think is best suited to learn the Genki Dama / Spirit Bomb. Unfortunately, Chaos and Grandpa Gohan will not be able to participate in the fight AGAINST the Saiyans because they cannot be resurrected twice by Earth's Dragon Balls and have not yet completed or started training, as in the case of Grandpa Gohan who did not even begin.

However, it is very likely that Grandpa Gohan and Chaos become tremendously stronger, after all humans in Dragon Ball are weak, but gain more fighting power in a short time, see DBZ the Z when they trained with Lord Kaioh of the North how strong they got, and with less training time than Goku. I imagine that Mr. Kaioh of the North will teach not only kaioken and Genki Dama / Spirit Bomb, but other very powerful techniques that he knows, he has already imagined them using teleportation and other sealing techniques for powerful creatures.