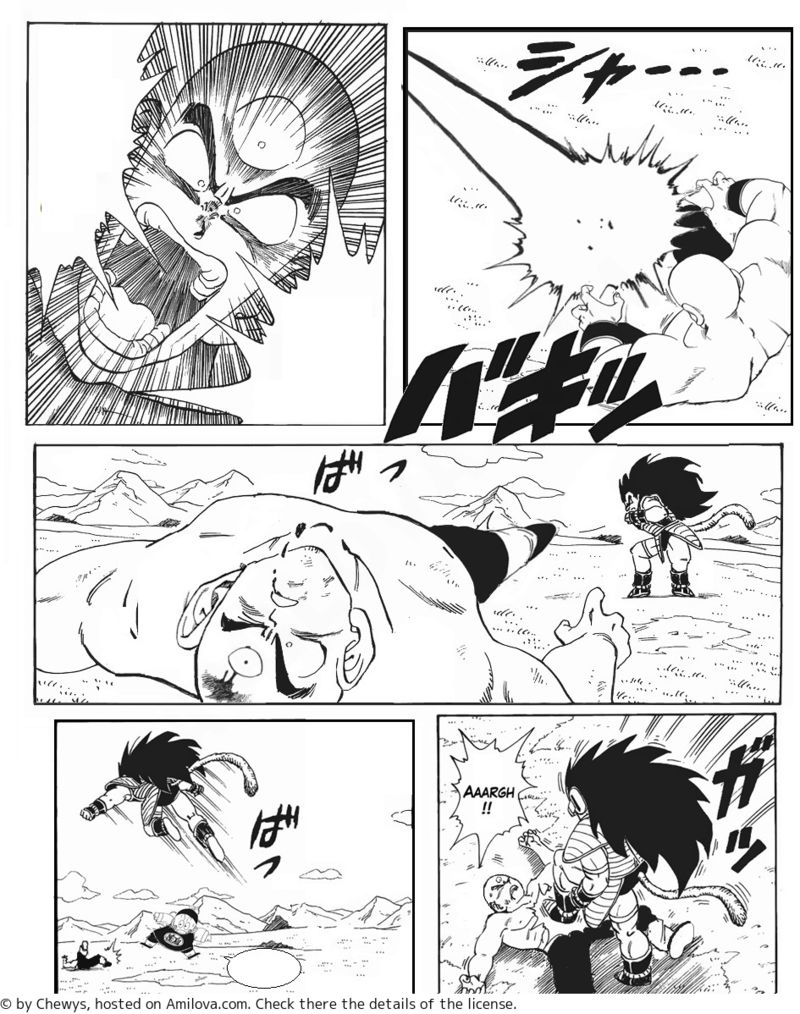 Ouch! That had to have hurt! Tien is about to get the Goku treatment, and receive some broken ribs! However, Raditz is making a big mistake by leaving his tail unguarded and wide open like that. I sure hope that some small, pale skinned midget man doesn't try to grab it!

Question is why would any of them grab it? Without a Goku on this Earth, they don't know about that weakness. The only way I can see it happening is if by some stroke of luck they happen to grab it for some unknown reason and then find out about that weakness.

Event without knowing that it is a weakness, it would not be strange for Chaotzu to grab it in order to try to pull Radish away from Tienshinhan, I mean it would be a pretty logical and istinctive thing to do.

Why would it not be the case? Most of Goku's friends and former enemies have attempted to grab Goku's tail at least once to try and find a weakness in him. Grandpa Gohan was the first human to ever learn about the Saiyan's weakness. ChiChi learned about it when she used his tail as leverage to mount the Flying Nimbus. Yamcha was able to deduce that Goku's source of the Oozaru transformation came from his tail. Master Roshi/Jackie Chun also did something similar, without prior knowledge of his Saiyan origins. He even went a step further and blew up the moon to prevent Goku from transforming at all.

Besides, there is still a way for Raditz to escape. When placing Raditz in a Full-Nelson, Goku explains he did not grab his brother's tail again because he feared that Raditz would most likely sever his own tail to escape if he tried to (Raditz's own response implies that he would have severed his tail had Goku tried to grab it a second time). All of these events occur in the manga as well. Raditz's best bet would be, in the event if his tail was grabbed, would be to catch Chiaotzu off-guard(as easy as that is), and sever his tail to escape.

You stated accidental occurrences and logical deductions based off a transformation and prior knowledge about the tail being a weak point. Even if I hadn't already seen the next page by the time of this post, I'd still think that grabbing the tail wouldn't be a go to thing to stop Raditz from hurting Tien because getting in close against a far stronger opponent when you have long range attack capabilities and no reason ahead of time to do so is a very stupid choice especially after seeing your comrade succumb to being disabled in close range combat. Therefore it'd be likely that Chiaotzu wouldn't make such a discovery. Anyways if Chiaotzu wanted to do it close range, it'd be far more likely to succeed if he did a flying tackle.

Also discovering it because Raditz goes Oozaru is almost definitely not gonna happen since Raditz doesn't know the Blutz Orb skill and the likeliness that this fight lasts long enough to reach nighttime and by some miracle it being a full moon too is not very likely.