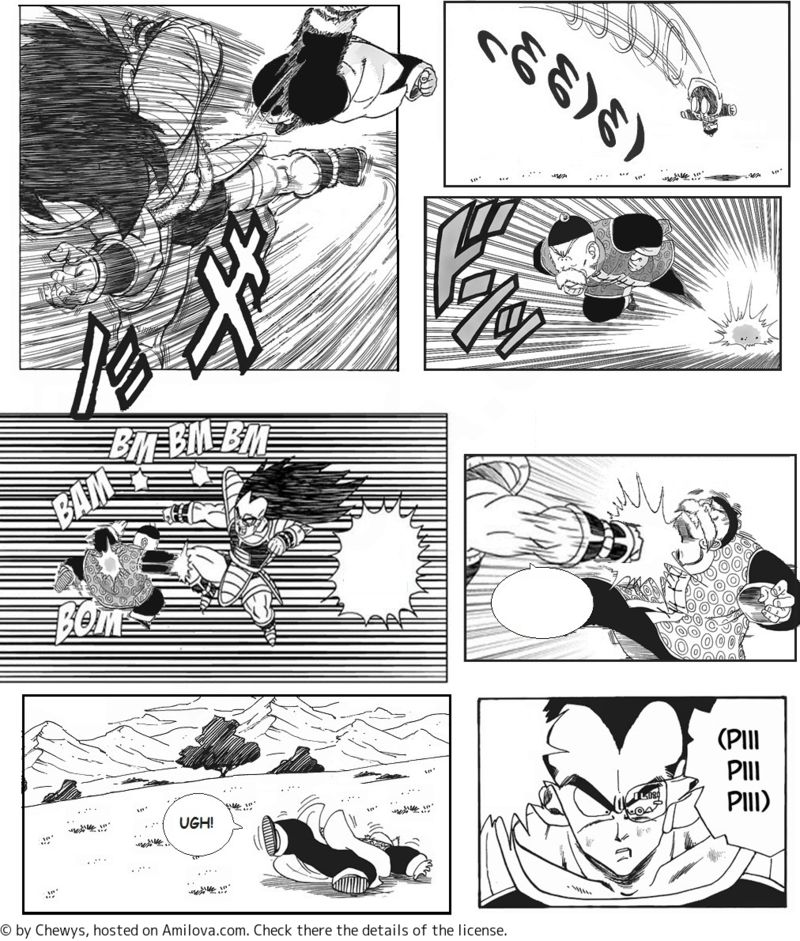 Either Sokidan or Destructo Disc.

This starting to become repetitive. Probably the last time at least.

Yep, this chapter has been all about Raditz gaining the upper hand the warriors ass-pulling something to keep up, while draining out. They are pretty much over the limit by now.
I'll try next chapter to avoid such a resource. It's just i wanted everyone to get a swing at Raditz

Repetitive would be if it was the same character over and over. I believe showing the Z Team taking it's swings in the ways we always wanted to see (instead of all just being weaklings waiting on Goku) is VERY interesting. Particularly showcasing everyone's special moves that get forgotten in Z due to low power levels.

I do not believe anyone would have complained if we were reading it in full form, it is only the waiting for pages that puts people on that negative edge imo.

I loved Gohan's skill equating to letting him fight above his power level, much like Roshi in Super's Tournament of Power.

Thanks for such an awesome story keep it up!

Yep, that's also true. Having to wait for the pages makes any repeated resource too much! But, those are the rules and i have to play by them.
Since Tien trying to solo Raditz after Chiaotzu got murdered i've been having the feeling the battle was getting in a loop: Raditz about to kill, then something happens, Raditz gets pushed back, then again Raditz about to kill and so on... it's been 4 times already. I guess it's enough.

I needed to present a scenario where everybody could show all of their potential in order to make a stand against someone as superior as Raditz... Yamcha and Tien have gone way above their limits (specially Tien) and are making their last stand now. Raditz has much more reserve, but he too is taking a toll.
For example, even thought Grampa Gohan moves really well, Raditz wouldn't have missed that kick when he was 100% fresh.

Oh yeah I definitely understand the schedule of a free webcomic. It doesn't bother me at all.
And I really believe that if Toriyama had written this fight it would have gone very similarly as well. Think of how they repeatedly tried and failed against Nappa too. The stakes get higher and higher as the loop goes until people died or something strong enough to stop him landed (in that case Goku).

I think your story is spot on and interesting. And good poing on Raditz being worn down. His own power level would probably read much lower right now than the 1200 we are used to after such a fight and expenditure of energy.

I honestly don't mind these long chapters. It feels like the original DBZ manga with full fights intact, and not like the DBM Specials that normally shorten them. This is supposed to be a faithful recreation of Universe 9 in a manga format. It's going well so far! You stay true to both Toriyama and Salagir, yet give your own unique twist on the source material

Anyway, I agree with everyone getting a fair shot at Raditz. Even with the Earthlings being nearly twice as strong as they were at this point in DBZ, they still are less than or equal to Goku and Piccolo. And even when they teamed up, Goku and Piccolo struggled immensely and couldn't even touch Raditz despite using their fully charged techniques.
The only times they got the upper hand on him was when Goku grabbed Raditz's tail because he personally knew about the Saiyan's tail being their weakness. The Humans in Universe 9 don't know that yet, so they are having a much tougher time. Not only that, but there is no Gohan (the half-Saiyan son of Goku) to get angry and inflict enough damage to Raditz and stun him long enough for Goku to hold his brother down and for to Piccolo kill them both with a Makankosappo. It will take the combined might of everyone to defeat him in Universe 9!

I think the battles with Nappa and Vegeta will be even more interesting, since either Tien or Krillin will train with King Kai and be on a more level playing field with the elite Saiyans since they will have Kaio-ken.

Raditz must be tired.