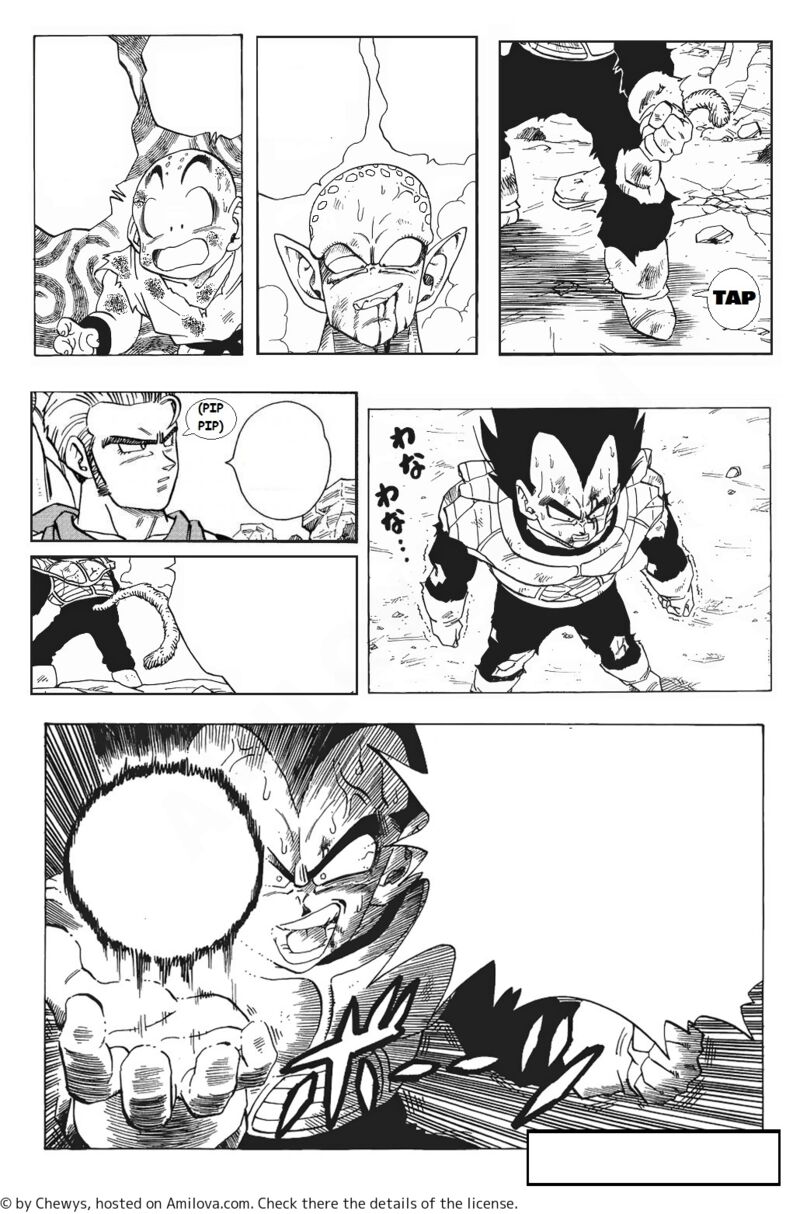 Aaaaaaaaand... so we finish in time record this chapter (since 2017 that i didn´t have this rythm).
Thank you very mucho to all the Patreons for making this possible!!
We now go back to our usual rythm of 3 pages a week, dear readers.

Let´s celebrate again with a 4 pages a week rythm when we get to 40 Patreons!!

Thanks a again for following and supporting!! I love ya!

Remember to check Torrijo´s fanmanga "Freezer on Earth" and show him your support!!!

OK, this scene is way beyond cool.
Still not sure if this is a great idea though, whoever is the winner they're equally screwed.
Great chance for an escape.

That's what I think might happen. Krillin and Haarp might escape with Tien while Oozaru Vegeta deals with #14 and #13 himself, essentially taking out both threats at once.

What an awesome end to an extremely suspenseful chapter! Haarp truly is crazy for giving the last Senzu to Vegeta. Maybe he’s going to let his two enemies take out each other, that being Vegeta and the cyborgs. Gero won’t be forgetting about this one!

I also like that Haarp healed Vegeta instead of Tien. It’s a subtle jab at him since he didn’t heal Haarp with a Senzu because Tien didn’t trust him. That came back to bite Tien pretty good right now. You know it’s pretty bad when Haarp respects Vegeta more than Tien, his own comrade who trained together for nearly a year and should’ve settled their differences by now.


I’m okay with it, since Tien has had a good bit of the spotlight in the past two arcs, while Haarp was largely absent from the Raditz fight. This should serve as a good learning lesson for Mr. Three Eyes!

wtf are you talking about? Yamcha is the one who didn't heal haarp are u on drugs

Oh yeah. I forgot it was Yamcha that didn't heal Haarp. But he ended up paying the price anyway. I think Tien is still wary of him though. The only person who's given Haarp any sort of kindness so far is Krillin.

not sure haarp knew about vegeta having that technique to go ape again.Vegeta should be now 30000 and 300000 ozaru.Amazing fights to come.

Hey guys, nice to see Vegeta not down yet. And hmm considering on his second zenkai he is 35,500 this ape is way more then the androids will be able to handle, apart... but can they combine?
Also LoD and S6

noooooooooooooo
man harp you're really crazy :/
well, even with tien they would not stand a chance ....
But harp did not knew that vegeta could transform in giant ape without a moon...

Man these cyborgs are going to feel pain.

I hope for gero that he have another cyborg as a surprise otherwise this would be too easy for giant ape vegeta ...

Cant post a link but if you google : dbz official power levels

the 3rd image in the images section has the numbers.

official power levels has vegeta 18000 then 24000 then 30000.After that power levels from zenkai became silly.Goku went from 90000 to 3mil which made him 33x stronger.Whats the point of even training if you can just self blast yourself with a ki blast and eat a senzu.then get so much stronger each time.At first it was a nice story with vegeta being able to beat dodoria with that feature and then final form zarbon.But after that its just stupid.I guess since goku said vegeta power level went down when he made the fake moon it means he will be something under 30000.

I don't think Zenkais were ever meant to be made by self inflicted wounds. Saiyans are too prideful to resort to cheap tricks like that. The only time it happened was when Vegeta told Krillin to blast him while he dropped his guard. It was the only thing that would work since even Piccolo was heavily outclassed and Vegeta needed a way to close the gap with Frieza. Sadly for him, Vegeta wasn't able to come close.

To be fair, Goku did receive a lot of damage from training in 100x gravity. I blame Toriyama for not planning anything out!

But you're right. Zenkais are a ridiculous idea which is why Toriyama largely abandoned them in the series except for a few occasions.

The first post-Frieza Saga Zenkais I remember the most are from Perfect Cell after he survived his self-destruction (becoming Super Perfect Cell) and Goku Black getting powered up after being healed by Zamasu, achieving Super Saiyan Rose.

ya ur right vegeta said it wont work if self blast.I correct myself.Ask someone to blast you and then keep healing.It worked with vegeta and krillin.Indeed pride is a thing despite vegeta alredy having done it yet brags about his awesome pride.Not to mention babidi making him stronger just because he wanted to be evil again which is also a blow to his pride as if he cant do it himself if he realy wanted it.

yes but there is always a risk to be killed.
i mean sayen love to kill ^^
raditz did not care to kill his little brother
vegeta did to care killing nappa

and they need people to be strong and ready to fight immediately .
Even with their healing machines, it will take hours if not even days.

Of course if they had senzu maybe that would be a different story.

But other than that I agree, a first zenkai were cool and made sense, but toriyama abused it and fucked up any kind of logic :/

vegeta was afraid to fight ginyu after his reecom zenkai, but somehow was not afraid to deal with freezer in his basic form..
Just for the recall, ginyu has a power level of 120 000
and freeza told nail that he has more than 500 000
If the proud sayen was stronger than ginyu he would had killed him in front of goku...

and later vegeta also got one uniq zenkai and was far stronger than gohan ?!?

Too bad toriyama did not try to respect some rules.. he could had find the perfect solution : gohan zenkai are more powerful than true sayen zenkai because gohan is a merge between two species.

krillin should had said no to vegeta and apply the same idea to gohan...