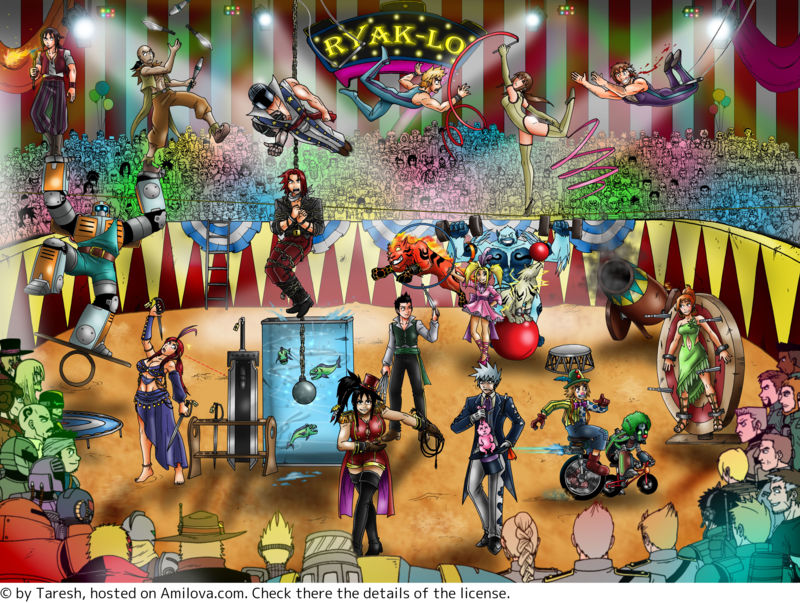 Seven years ago today i posted the 1st page of Ryak-Lo. ( plus there was about 7 years of planning and rewrites before that...14 years in on this no wonder i need the breaks :P )
So here's a pic to celebrate it and also kick back off as i continue with Ryak-Lo again after my hiatus.

There's a whopping 351 unique characters in this picture (if you zoom in) from every bad guy, Racer and bounty hunter, to side characters and origin characters. there's designs yet to appear in the story and even Villains set to appear in future arcs. Really makes me realise just how much i've designed for R-L (and this doesn't even include all of the random civilians, creatures, monsters & machines i've made.)

and i'm going to strive harder to get back into the solid work ethic that i used to have. I've got so much more cool stuff just waiting that i'm sure you'll love. I started to conceive Ryak-Lo the same day i discovered i was going to have a daughter and the story of Kodo doing everything he could to protect Ryna evolved from there, it was my way of expressing how i felt about being a father. It as initially high fantasy and eventually that changed into incorporating elements of sci-fi until i finally decided i wanted to create a world where many genres were mashed together, in a somewhat cohesive way. i wanted to create a world where any story could be told and have loved the challenge of making it work. it was something i'd only seen done similarly in final fantasy or star wars and wanted to make a world like that. While it's roots are in the action shonen manga style, i've wanted to get many sub-genres in there as well as have a foundation for other kinds of side stories. i'm just lucky that it has resonated with as many people as it has. and while i understand that a couple of long hiatus' have probably made a fair few people drop off or even forget about it all together i appreciate everyone that has read it, continues to read it and those that are yet to discover it.

Awesome!!! Thank you so much for it!!

Only thing this picture is missing is Illini´s rack

should be able to get it on my deviant art account http://taresh.deviantart.com/