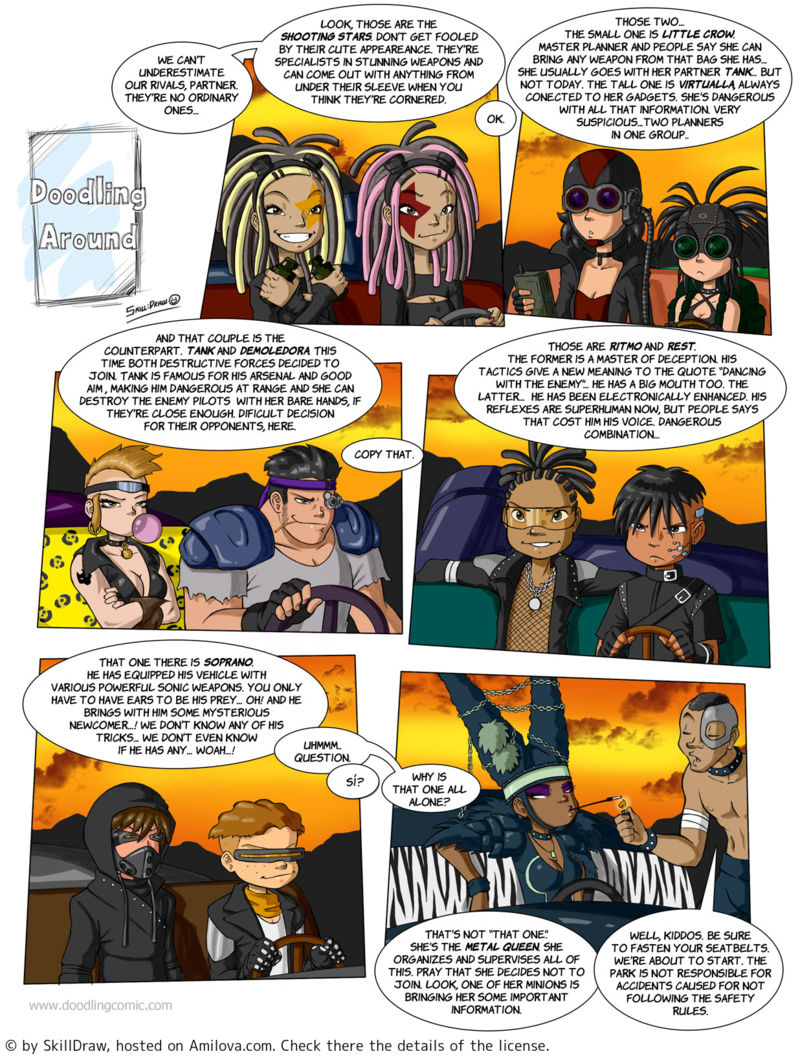 We can't underestimate our rivals, partner, they're no ordinary ones...
Look, those are the Shooting Stars, don't get fooled by their cute appearance, they're specialists in stunning weapons and can come out with anything from under their sleeve when you think they're cornered.
OK.
Those two... The small one is Little Crow, master planner and people say she can bring any weapon from that bag she has... She usually goes with her partner Tank... But not today, the tall one is Virtualla always connected to her gadgets. She's dangerous with all that information, very suspicious... Two planners in one group...
And that couple is the counterpart, Tank and Demoledora, this time, both destructive forces decided to join. Tank is famous for his arsenal and good aim, making him dangerous at range and she can destroy the enemy pilots with her barre hands, if they're close enough, difficult decision for their opponents, here.
Copy that.
Those are Ritmo and Rest. The former is a master of deception, his tactics give a new meaning to the quote "Dancing with enemy"... He has a big mouth too. The latter... He has been electronically enhanced, his reflexes are superhuman now, but people says that cost him his voice, dangerous combination...
That one there is Soprano. He has equipped his vehicule with various powerful sonic weapons, you only hate to have ears to be his prey... Oh! And he brings with him some mysterious newcomer...! We don't know any of his tricks... We don't even know if he has any... Woah...!
Uhmmm... Question.
Yes?
Why is that one all alone?
That's not "that one" she's the Metal Queen. She organizes and supervises all of this. Pray that she decides not to join. Look, one of her minions is bringing her some important information.
Well, kiddos, be sure to fasten your seatbelts we're about to start. The park is not responsible for accidents caused for not following the safety rules.
1659 views
comments

Starting from 1 € !
In HD and without DRM