Publish your comic
.Share your comic
with 126566 members!
Learn more... 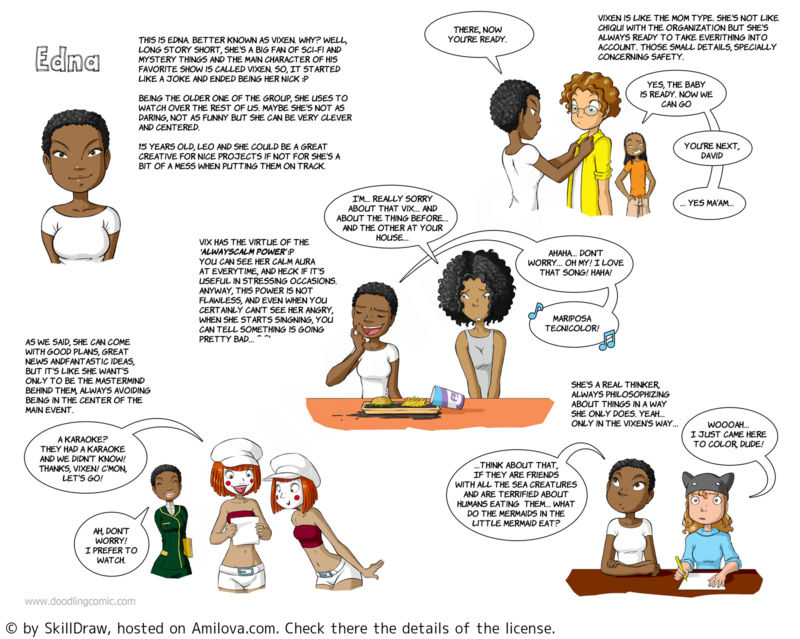 This is Edna, better known as Vixen. Why? Well, long story short, she's a big fan of sci-fi and mystery things and the main character of his show is called Vixen, so it's started like a joke and ended being her nick :P

Being the older one of the group, she uses to watch over the rest of us, maybe she's not as daring, not as funny but she be very clever and centered.
15 years old, Leo and she could be a great creative for nice projects if not for she's a bit of a mess when putting them on track.
Vixen is like the mom type, she's not like Chiqui with organization but she's always ready to take everything into account, those small details specially concerning safety.
There, now you're ready.
Yes, the baby is ready, now we can go.
You're next, David.
... Yes ma'am...
Vix has the virtue of the "alwayscalm power" :P You can see her calm aura at everything, and heck if it's useful. In stressing occasions, anyway, the power is not flawless, and even when you certainly can't see her angry, when she starts singing, you can tell something is going pretty bad...
I'm really sorry about that Vix... And about the thing before... And the other at your house...
Ahaha... Don't worry... Oh my! I love that song! Haha!
Mariposa technicolor!
As we said, she can come with good plans, great news and fantastic ideas, but it's like she want's only to be the mastermind behind them, always avoiding being in the center of the main event.
A karaoke? They had a karaoke and we didn't know! Thanks, Vixen! C'mon, let's go!
Ah, don't worry! I prefer to watch.
She's a real thinker always philosophizing about things in a way she only does, yeah... Only in the Vixen's way...
... Think about that, if they are friends with the sea creatures and are terrified about humans eating, them... what do the mermaids in the Little Mermaid eat?
Woooah... I just came here to color, dude!
1793 views
comments

Starting from 1 € !
In HD and without DRM