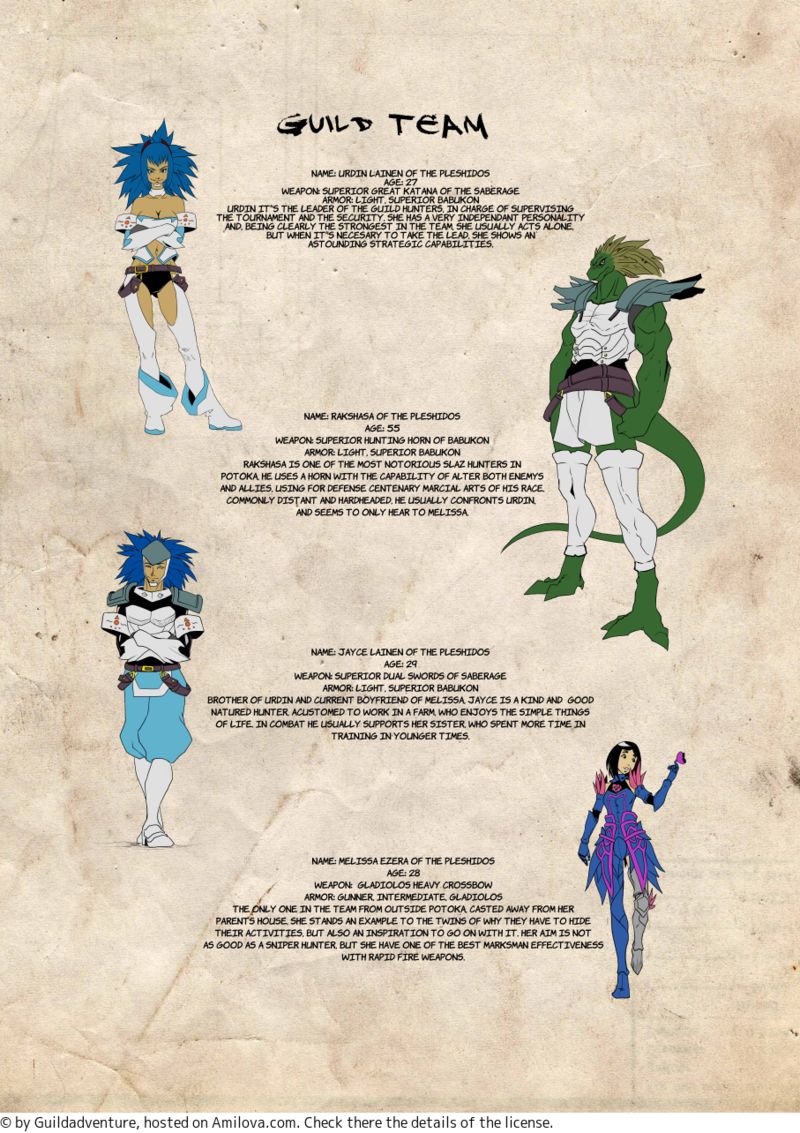 Guild team
Name: Urdin Lainen of the Pleshidos
Age: 28
Weapon: superior great katana of the Saberage
Armor: light, superior Babukon
Urdin it's the leader of the guild hunters, in charge of supervising the tournament and the security. She has a very independent personality but when it's necessary to take the lead, she shows an astounding strategic capabilities.
Name: Rakshasa of the Pleshidos
Age: 55
Weapon: superior Babukon
Armor: light, superior Babukon
Rakshasa is one of the most notorious Slaz hunters in Potoka, he uses a horn with the capability of alter both enemies and allies, using for defense centenary martial arts of his race commonly distant and hardheaded, he usually confronts Ursin and seems to only hear to Melissa.
Name: Jayce Lainen of the Pleshidos
Age: 29
Weapon: superior dual swords of Saberage
Armor: light, superior Babukon
Brother of Urdin and current boyfriend of Melissa, Jayce is a kind and good natured hunter acustomed to work in a farm, who enjoys the simple things of life in combat he usually supports her sister who spent more time in training in younger times.
Name: Melissa of the Pleshidos
Age: 28
Weapon: Gladiolos heavy crossbow
Armor: gunner intermediate Gladiolos
The only one in the team from outside Potoka, casted away from her parents house, she stands an example to the twins of why they have to hide their activities, but also an inspiration to go on with it. Her aim is not as good as sniper hunter but she have one of the best Marksman effectiveness with rapid fire weapons.
2499 views
1 comments

Today is the guild team, they do not participate in the tournament but they will supervise it.

support the author on http://www.patreon.com/kukuruyo