Signup for free
Read over 1390 comics
Get custom suggestions!
Participate to the community! 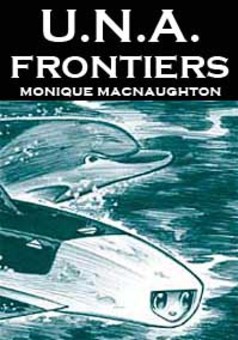 In this story, civilization was considerably devastated but not quite plunged into a new dark age. However, society is stuck with 19th-century conditions because the easily accessible resources that enabled the mechanization of the early 20th century are pretty much gone. Nevertheless, small, hidden hi-tech enclaves cling to life, including an undersea habitat in the Caribbean which finds itself in deep trouble when an aggressive and expansionist South American empire comes knocking. The majority of its population retreat to the deep bunkers and shut down the upper complex to make things difficult for the attackers.

Two escapees, a teenage boy and an aquatic AI, make their separate ways to the North American mainland where each must survive on their own and seek help for their cause in a world gone back to the horse and buggy. Another AI, a 4,000-year-old alien probe, joins the fight, having kenned to the presence of another self-aware robot on the planet (which was his homeworld's criterion for establishing contact).

39 Comments on the pages of U.N.A. Frontiers

psyraptor 25Jan ch14 p19 Such anger in him...it can only lead to the dark side...well at least they have cookies

Jesus4U 3Nov ch11 p3 A Robot having nightmares ? That can't be good.

Jesus4U 22Aug ch9 p33 Poor Dr. Asimov, he had the best of intentions, but I don't think he would be well liked by robots. :D

39 comments in other languages.

Message board : topics about U.N.A. Frontiers

Coydog New Topic! 4Sep All comics - U.N.A. Frontiers - Blank pages for translation - Chapter 1 I re-uploaded the blanks for Chapter 4 since they were apparently not showing up. Try to access them again and see what happens.

Average of readers per day: 248