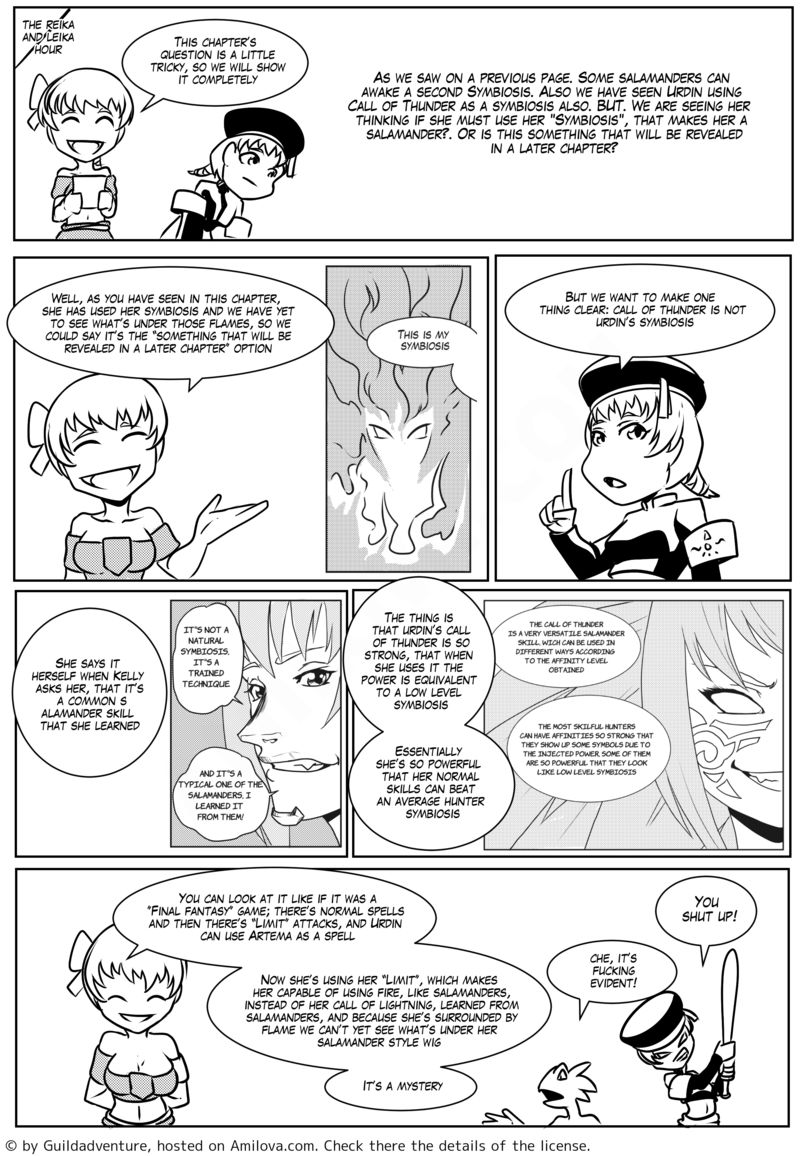 The Reika and Leika hour
This chapter's question is a little tricky, so we will show it completely.
As we saw on a previous page, some salamanders can awake a second symbiosis. Also we have seen Urdin using Call of Thunder as a symbiosis also. But. We are seeing her thinking if she must use her "symbiosis", that makes her a salamander? Or is this something that will be revealed in a later chapter?
Well, as you have seen in this chapter she has used her symbiosis and we have yet to see what's under those flames, so we could say it's the "something that will be revealed in a later chapter" option.
This is my symbiosis.
But we want to make one thing clear: Call of Thunder is not Urdin's symbiosis.
She says it herself when Kelly asks her, that it's a common salamander skill that she learned.
It's not a natural symbiosis, it's a trained technique.
And it's a typical one of the salamanders, I learned it from them.
The thing is that Urdin's Call of Thunder is so strong, that when she uses it the power is equivalent to a low level symbiosis.
Essentially she's so powerful that her normal skills can beat an average hunter symbiosis.
The Call of Thunder is a very versatile salamnder skill which can be used in different way according to the affinity level obtained.
The most skillful hunters can have affinities so strong that they show up some symbols due to the injected power some of them are so powerful that they look like low level symbiosis.
You can look at it like if it was a "final fantasy" game, there's normal spells and then there's "limit" attacks, and Urdin can use Artema as a spell.
Now she's using her "limit", which makes her capable of using fire, like salamanders instead of her Call of Thunder, learned from salamanders, and because she's surround by flame we can't yet see chat's under her salamander style wig.
It's a mystery.
Che, it's fucking evident!
You shut up!
1937 views
1 comments

questions and answers are back