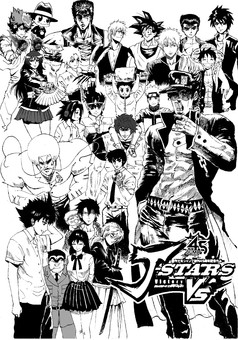 And so it begins! This project is a reboot of Yusuke Murata's 2005 one-shot "Jump Super Stars", and with the help of artist Cheng Xiang drawing new scenes, we were able to add many new characters to the roster. Especially those who only later appeared in the subsequent video game "J-Stars Victory VS".

18 Comments on the pages of J-Stars Victory Vs

bnkjk 28Apr ch1 p7 This is really a great page

18 comments in other languages.

Chajiro 30Jul ch1 p1 I don't know how to translate the Hi from the second ballon when the boy is running. I don't think it's Hi like "Hello",it's see (...)

JSP 25Jul ch1 p1 I don't really understand but thank you for translating it :)

Message board : topics about J-Stars Victory Vs

Average of readers per day: 79