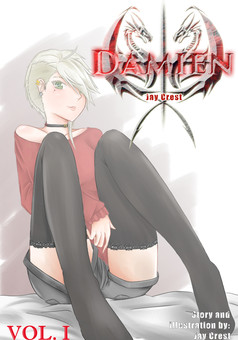 ____________________________
When lead vocalist and secret vampire Scarlet Rae Drakona fought with the band's limelight-hungry bass player, Scarlet had no choice but to kick her out and find a replacement.

That's when she met a man playing their band's song on a piano. Without hesitation, she pulled him in and made him part of their band. But as she spends more time with him, the more her blood lust grew. Why?

Follow Scarlet as she unravels not only the secrets of this man but also the secrets behind hers as well.
____________________________
Rated T+
- DAMIEN REIGN may contain explicit content, graphic violence, and vulgar dialogues not suited for ages 15 and below, reader discretion is advised.

Message board : topics about DAMIEN

Jay Crest New Topic! 27Dec DAMIEN Your artwork is pretty cool. Thank you for the praise ^_^

Average of readers per day: 8