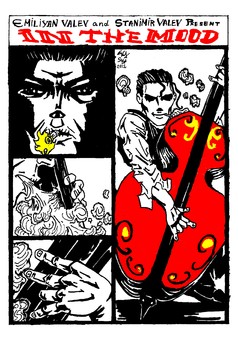 Inspired by arts, this is a story about a musician, and his love and passion for music. We invite you to see our animated short film IN THE MOOD. It is an adaptation of our strip IN THE MOOD which has been exhibited in Serbia, Romania and Bulgaria; and published in Romania, USA and Argentina. https://www.youtube.com/watch?v=KlM0zzjmXVs

“In The Mood” (2012) was showcased at BALKANSKA SMOTRA MLADIH STRIP AUTORA, LESKOVAC, SERBIA 2012; published in the Romanian comics magazine “COMICS” Issue 12 (October 2012) which premiered at t he 22nd SALONUL INTERNATIONAL AL BENZII DESENATE, Constanta, Romania (September 2012) (International Exhibition of Comics) . It's been exhibited at Bucuresti Comics Fest, 2013 Romania; “First National Exhibition of Bulgarian Comics” Bulgaria, 2013-2014. The comics is published in the U.S. Anthology INDIE COMICS QUARTERLY Volume 01. The 98-page book collects works of US and international creators from the Indie Comics Scene. We’re happy that our story is also nominated for SPECTARE CREATIVE’S INDEPENDENT COMIC AWARD. IN THE MOOD makes its Spanish language debut in the Argentinean arts magazine “METROPIA”#08 (2014).

Average of readers per day: 3