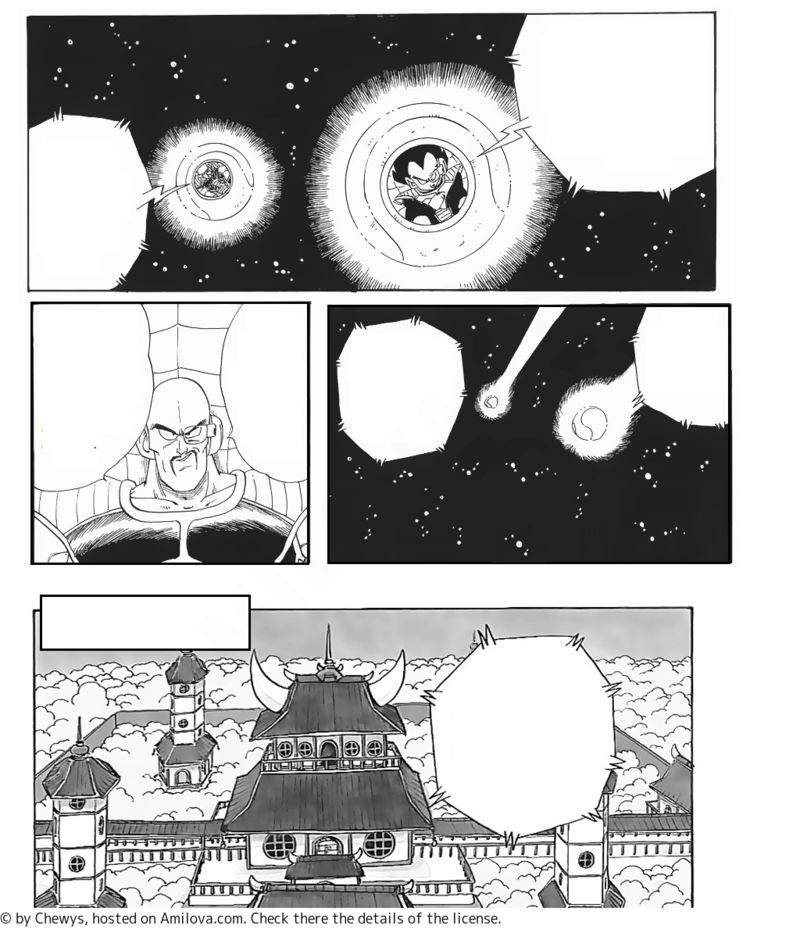 Next page: the epic battle between Raditz and Emma-sama!!!

Second defeat in a row for Raditz.

What does Raditz just get sent to Hell instantly due to Yemma stamping the paperwork and it being done? Also how is Raditz even really communicating here? After all only heroic good entities keep their bodies and only by some special exception can they get them back like how Vegeta was given his back during Buu Saga so he could return to Earth on a one day pass. Can the bodyless souls of Other World even talk without mouths?

Only “close to their power”? Zarbon and Dodoria were slightly stronger than Vegeta, at this point of the story, but in this universe they have been dead for...23 years? Don’t know, but this statement sounds a little inaccurate... :/

As for Raditz, you recently stated he is a little stronger than his canonical counterpart, but notice that 1200 was the power level of the saibaimen, Raditz’s was stronger: 1500, according to Toriyama’s anthology. In fact, both Piccolo’s Makankosappo and Gohan (and surely Goku’s strongest Kamehameha) exceeded 1300, which means Raditz was clearly above that figure, otherwise they would have been stronger than him, which is clearly wrong!

They never trained. Vegeta outright states that they "hide behind Freeza" and if we go to DBM, Dodoria is stated to be 22000 when he died. So he's likely stayed the same.

Very true. I suppose much of that reason could be that Frieza did not want the few remaining Saiyans to grow stronger and rise up against his ranks, so he would sent them on easier missions and force them to remain at a lower power level than his top lieutenants, like Cui, Dodoria and Zarbon.

So Nappa and Vegeta are stronger too?

You didn't really add anything to my comment, actually... In this story Raditz is a little stronger than his counterpart, who was actually stated to be 1500, not 1200. Unless you want to retcon. Ultimately, nobody really cares about this trivia, just keep in mind Raditz was 1500 in DBZ, for the reasons stated above.

The power level of 1500 you used has dazenshuu 7 as it's source. Dazenshuu's are wildely inacurate and should not be used. Now you said Goku's kamehameha is stronger than 1200, but his kamehameha was only 924.

If Raditz was 1500, he should have been able to avoid all 3 of these attacks, but he was hit by Gohan, freaked out by Piccolo's special beam canon and actually killed by the second one.

Radditz in this story was able to avoid Tien's kikoho, which, as Raditz is 1350 here, is impressive, since he was surprised and Tien's attack was 1339.

And in this story, Raditz fought 10 people in a row. So he was exhausted at the end of it. DBZ Raditz would have won had Gohan not hit him, weakening him. He wasn't anywhere near tired before that. So he really should have been able to dodge him.

You want to discuss go ahead

And the reason I say the dazenshuu 7 shouldn't be taken seriously is because they are known to do ridiculous power estimates. They think, for example, that Popo's power level is above 1000. While Popo stated Kami was way stronger than him. And here Popo is 302 and Kami 392. Which fits canon.

I forgot to comment on the last page, but I wanted to say how hard Gorkor got punked by Vegeta! Well luckily for him, the two Saiyans will surely pay for leaving poor Gorkor all by himself!

And wow, I REALLY under estimated Gorkor's power! It makes sense why Vegeta and Nappa are forced to tip-toe around him and please him. Gorkor's dimwitted and childlike personality reminds me a lot of Fat Majin Buu.
I can see Gorkor heading to Earth some time in the near future, maybe to get revenge on the Saiyans for tricking him, or in thinking they will need his help without Gorkor realizing the Saiyans were possibly defeated by the Earthlings.

So many thing I want to see xD

what became C-11 (Chi-chi)? How the living are going to train? Will Piccolo be released?

And in the other universe... what will Bardock do?

We can assume a "second invasion" will happen on Earth. Led by Vegeta. =D
I don't think we'll see everything Bardock does, that doesn't happen on earth after all.

Chichi must be strong too (she managed easiliy Piccolo's son). She is partially human and thus maybe she can increase her power by training

Good point. She could be the strongest human on earth for all we know. =D
It all depends on how far along Dr Gero is in his research.

I find it hilarious how Raditz thinks he is a great anything. Great weakling maybe.

Not sure how Raditz is even speaking without a mouth since he has no body and should just be a disembodied soul since only heroic good guys can keep their bodies after they die. Even Vegeta in the original series, who had done much good to somewhat atone for his previous evils, had to be given his body back so he could be revived on a one-day pass to Earth during Buu Saga.

Well in the original manga goku ask Enma if Raditz had agreed to go to hell without a fight, and Enma says that he quickly calmed him down.