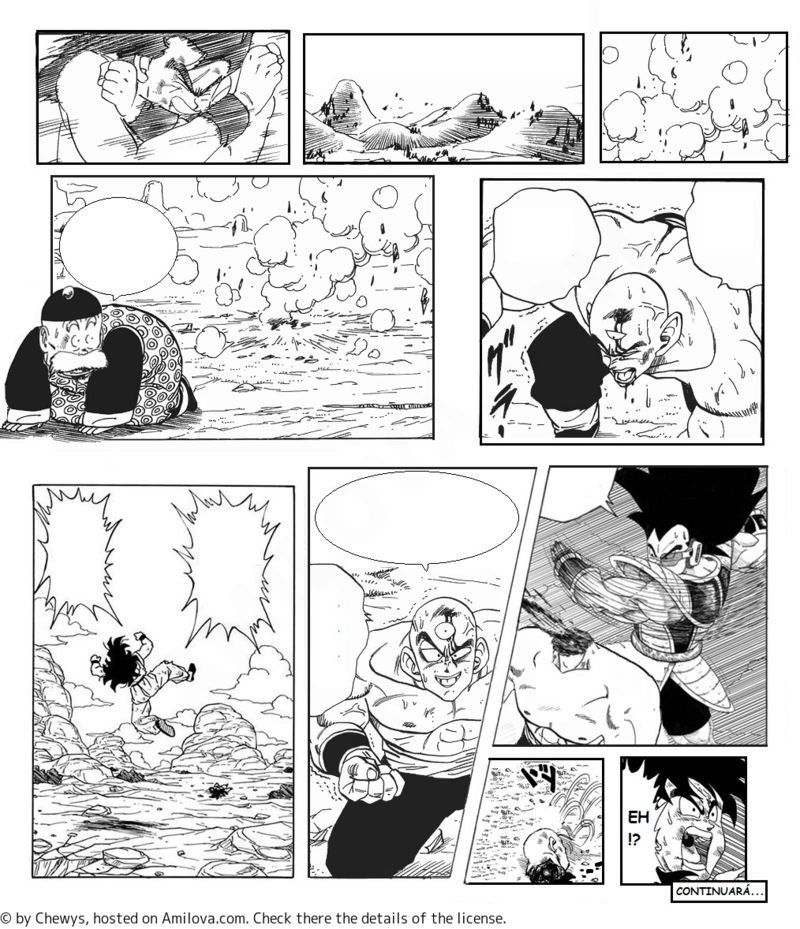 Raditz striking from behind was taken from Pouerte and his non official U13 special (it´s in the Fanart section of DBM). If you haven´t checked those, I strongly suggest that you do.
It´s much like this, another possible "What if" for Universe 13 (except not a copy-paste, because unlike me he has amazing art skills that have improved so so much).

Tien would have dropped dead a second later aniways.
Raditz just made sure Tien can be revived by the dragonballs

Holy shi-damn that caught me off guard. Beheadings in Dragonball are always good in my opinion.

Oh no, Tien! You lost your head!
So... Tien could be revived, but Chaoutzu not (if I remember well). In the next chapter Krilin and Roshi will arrive... will Krilin be killed too?
And what about Dr. Gero and his androids?

Wow! This is the most brutal death we've seen since Master Roshi was killed in Chewys' version of the King Piccolo Arc! Now we know for certain that Tien will be training with King Kai, and presumably Chiaotzu as well.

And we now enter Act III of the Raditz Saga. Krillin and Roshi will be the ones to defeat him!

@Atan
This is Tien's first death, so he will obviously be brought back to life. As for Chiaotzu, I don't think he will return, since he was already killed by King Piccolo and wished back once by Shenron. That is the biggest drawback of Kami's Shenron; which is not good due to the high amount of threats coming to Earth throughout the series.

As for Dr. Gero, I'm certain he is watching the fight with his robotic spy drones. He did the same as revealed in Chapter 6, when his spy drones followed King Piccolo, as well as his sons Haarp and Banjo. Gero must be very upset that Raditz stole his chance for revenge against the last son of Piccolo's lineage! Regardless, Gero will receive a ton of useful data to use for his androids, and maybe even steal some of Raditz's cells to use for Cell later on! He will also get to see how much potential Yamcha has as a warrior, and think about kidnapping him to convert him into a cyborg.

Holy shiiiit! I didn't see that one coming! All of Tien's ki was spent and his head sliced right off, brutal but fully believable! Come on Krillin and Roshi!! We need yooouuuuu!

Roshi has no option to use mafuba to trap raditz in rice cooker, dies after using mafuba

tenshinhan + krillin learns kaioken from the kaio, yamcha gets turned into the android