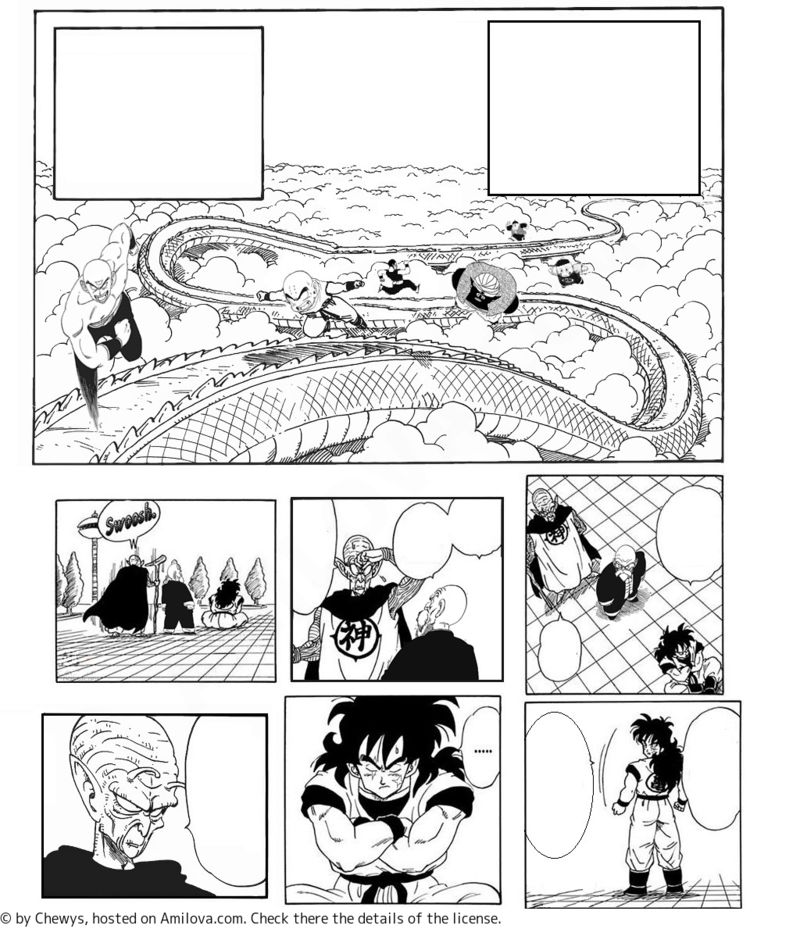 Haarp is faster than Chiaotzu, isn't he?

Yamcha really is cool in this shot. Him meditating and making up his mind. The stronges earthling left...

But maybe i'll correct it later

Well I imagine Tien and Krillin will get there soon enough, but for the rest of them it's going to take considerably longer...

next page yamcha did a suicide to go train with his friends ?

LOL that would be an idea!!

Yamcha wasn't killed yet was he? He might just ask Kami to swiftly kill him so that he could join his friends - looks like a great opportunity tbh XD

On the serious note - are we going to see him become a cyborg now? Seems a bit early for that - If he'll become no17 now vegeta would not stand a chance...

He's made himself a main character purely by conning Enma. xD

As for becoming a main character, I must tell you that Haarp has told me he is offended by you insinuating he wasn't already a main character. The main character of his life as the Harem King of a small independent country on E-Arth that is.

Nah Haarp's his own character. He's that guy who does insane things and succeeds doing them =D

He's more than a Piccolo stand in.

I wonder how much stronger will they get by the time Vegata and Nappa will get there,
I bet not as strong as Goku was but stronger than Nappa.

I missed a few pages worth of content, but man is this getting good!

I really love Haarp's personality. He is so much different from Piccolo Jr in every way, and it's refreshing. He's similar to 23rd Budokai Saga Piccolo Jr, but a lot more charismatic.

I do hope Haarp will take his death against Raditz seriously and actually try to train harder, sort of how Piccolo Jr trained harder after losing to Goku.
Haarp has fallen behind the Humans after they trained with Kami. Even Chiaotzu is not far behind him now. He better not let it happen again!

I wonder what Yamcha's plan to get stronger will be? I imagine that he is going to enter the Room of Spirit and Time in order to speed up his progress to get stronger. He has already surpassed best training masters on Earth, so he won't improve much by himself. He isn't dead, so he cannot train with King Kai.

There's always the gravity room.
Or at least Bulma can build one.

I don't think Yamcha can survive HTC yet but we'll see.

Yamcha needs to think of a plan, I think he will use the time room, but alone and almost an invitation to madness, Goku only managed to stay there for a maximum of 20 days, a couple of weeks, look he was someone used to solitude. I really think he's not ready yet, but if you have a partner, yes. And Bulma can always build a gravity machine.

Yamcha needs to think of a plan, I think he will use the time room, but alone and almost an invitation to madness, Goku only managed to stay there for a maximum of 20 days, a couple of weeks, look he was someone used to solitude. I think this time Kami-Sama will reveal to Yamcha that he has a plan B, he will recruit more humans to train, Hercules] [Mr. Satan and me right in this lineup (possibly will become a friend of Yamcha since his children are married in the future). The other human fighters I bet on Yajirobe, Nam, Rey Chapa, Ranfan (the only woman) and Pamput.

I'm not sure if Dr. Brief was capable of building a gravity room as this point in the story. In canon,
Dr. Brief never introduced it until Bulma, Krillin and Gohan had already arrived on Namek and Goku had recovered after the battle with Vegeta. Speaking of which, Dr. Brief built the gravity room after only being able to salvage the Planet Trade technology used from Goku's spacepod. They haven't found Raditz's spacepod yet, and we don't know if Nappa and Vegeta will survive Earth at all. Whether one of them survives and flees back to Cooler, or if they both die and get their technology reverse-engineered is still unclear.

And I agree with you on the Room of Spirit and Time statement now. While Yamcha is far more stronger and mature than when Goku entered the Room alone as a kid, I doubt Kami would let him enter. This is because the RoSaT is only meant to be used in extremely dire circumstances (i.e. the Androids/Cell threat, Majin Buu). Right now, the Earthlings have one year to prepare for the incoming Saiyan invasion, so they still have a bit of time to train up. It's certainly better than taking away one year of your lifespan while in the time chamber.

I think your Plan B idea will be the best choice. I even mentioned it ago earlier in the chapter. Surely Yamcha and Roshi will invite them up to Kami's Lookout for them all to train, similar to what Yamcha and the other Humans went through in canon. The other humans might reach the high hundreds or even up to 1000. Yamcha himself might become a lot stronger, since he's already pushing into the 400s. Some more advanced training from Kami could push him into the high 2000s or even the low 3000s.

I am terrefied at the thought of Kaioken Mr. Popo. And imagine the Spirit Bomb...