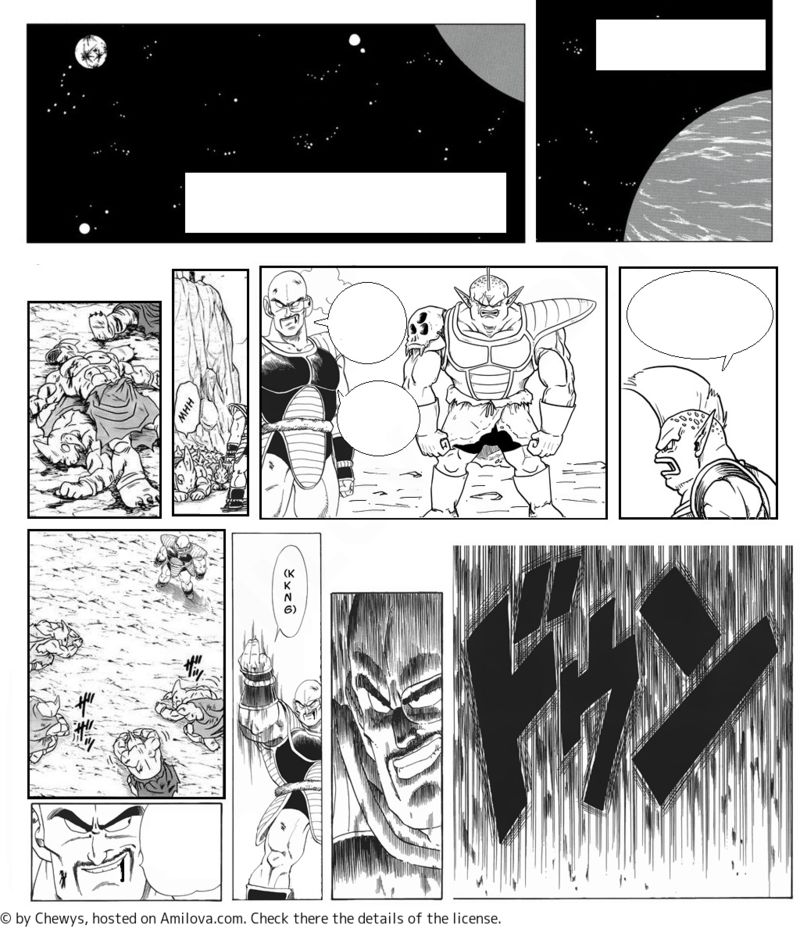 Hey!! Know the big guy? That´s right! It´s Gorkor the great!!! An OC from dsp27, the grat artist that gave us U4 special about Buu.
Gorkor was first introduced in Buu´s temple. I liked his design so much (and the fact that he seemed to had survivred Buu´s strike) that i wanted to put it here. So dsp27 contacted me and made some great designs for me to use. He has a big role to play in U9!!!

Here´s dsp27 deviantart!! Be sure to visit and comment!!

He was your gravatar for a while, wasn't he?

Gorkor will be fighting u9 is doomed

What a pleasant surprise! It's a double reference in this page; first with the Babarians from Super, and now GORKOR THE GREAT?! I never expected him to be a member of Cooler's army. he also looks incredibly badass with wearing both Planet Trade Organization armor and his own clothing from his U4 appearance. The two Saiyans were wise to have additional allies in their ranks.

I wonder what Gorkor's big role will be. Is he actually in charge of Nappa and Vegeta?! That would be a shocking plot twist

Maybe Gorkor will learn the error of his ways and become a valuable ally to the Earthlings? Maybe he will become a recurring villain, like how Haarp was earlier?

Hahaha, yes, it´s true. Babarians and Gorkor, all in one

But Chewys, Gorkor is so overpowered! Yamcha might actually die in U9 if Gorkor comes to Earth

Maybe I, Kor Saiyajinkami, the great defender of justice in the Omniverse will come to the aid if U9 Yamcha ends up getting Yamcha'd by Gorkor.

Nappa is not working with Vegeta in this timeline?

Who knows except Chewys really? Remember that Vegeta and Nappa are members of the Cooler Forces and if Cooler orders Nappa to go with Gorkor on a mission then Nappa has to follow his orders.

I think it would be cool if the first wave of Cooler Forces they had to fight were Nappa and Gorkor, but I have a feeling that Nappa and Vegeta will arrive on Earth to gather the DBs.

Vegeta, Nappa, and Raditz were on a private Scouter channel that only they could communicate on when Raditz went to Earth. Anyways at least for the original series, do you agree with the private Scouter channel idea OR do you have a different reason that only Vegeta and Nappa heard about the DBs and came to Earth and for some reason Frieza didn't find out about them for Earth and only for Namek? Obviously Cooler isn't Frieza and very well could've heard the Raditz transmission because he didn't allow private Scouter channels to be used AND I won't ask about that Spoiler cuz I know you don't give away Spoilers.

Now in DBM, they were not planning a rebellion against Frieza at that time because I think Toriyama added that retcon much later, so at least for DBM and I guess this U9 Special too, Raditz must've come to Earth for Kakarot too to help take on an upcoming mission, but Cooler didn't know they were going to seek the baby he killed OR maybe thought it'd be funny if he didn't inform them that he killed Kakarot as a baby, right? Again no Spoilers since I'm asking if one of two options is right and if you answered a simple yes to that question I'd only know one of two things could be correct, though I guess narrowing something down to 2 options might be considered a Spoiler maybe. DBM has most Universes where Frieza was still alive be that the mission was the Helior Mission and it only succeeded in U13 due to Kakarot being there AND Kakarot having come up with the Blutz Wave Lamp implants idea too. I'm also curious about whether the Helior mission was gonna be a thing in U9-B too, but since you'll probably see that as a Spoiler, I understand if you don't tell me about that.

Well, we all know it's because of Frieza being concieved much later
But if we have to find logic to it, one explanation could be that they were on a private chanel... although i find difficult to imagine anything private in the Frost Demon empire.

The other, and for me more likely scenario, is that Raditz's conversation was being listened to, but diregarded as crazy talk by some random alien in a distant planet. Probably Raditz wasn't payed that much atention and only Vegeta took consideration of it.
But Vegeta was one of Freezer's top 10... among probably an army of hundreads of thousands... maybe millions. So his records were much more conspicuous. Futhermore he only confirmed the rumor about the Dragon Balls AFTER he saw Goku had indeed been revived. And talked to Nappa about going to Namek. Only then, when nameks were said to be involved and a proof was shown, whoever was listening took serious note about this magical items rumor, and reported it to Frieza.

About the reasons for going to Earth, someday well see.

I don't exactly agree with the Saiyans having a private scouter channel, at least for the sake of DBM's continuity. I have an example from the U19 Novel to back this up, but the novel contains spoilers for that universe's origins. If you are still interested, I can tell you if you would like.

Anyway, the Planet Helior mission should still be one of Cooler's priority missions in U9 because the planet and its race creates advanced technology, from which his empire would greatly benefit from (powerful exoskeletons to be used by soldiers, Carbonite, climate control tech to make barren planets habitable).
It's why Frieza originally wanted to invade Helior so badly. Cooler shares the same megalomania as his brother, so it should be no surprise that he would want that Heliote technology as well.

However, the plan to invade Helior was put on the back burner in most universes from the exact moment that the Saiyans indirectly discovered the existence of Dragon Balls due to Raditz's insubordinate act of landing on Earth to find Kakarot.

Like Chewys said, Raditz's death alone would have made the Dragon Balls merely be a conspiracy for most of the Planet Trade, since Raditz is a low-class warrior and particularly not a popular one.
But since this attracted the attention of Vegeta and Nappa, some of the Planet Trade's more elite warriors, then their success or defeat would give more credibility to the Dragon Balls being the real deal.

Their own journey to Earth led to the confirmation of the Namekian race and the possibility of other Dragon Ball sets existing; and most importantly, actual proof that Dragon Balls can grant wishes, i.e: Goku being resurrected from the dead.
For the Frost Demons, this meant that a real chance for immortality is a far greater reward than obtaining advanced technology from a planet that can be invaded at a moment's notice.

What does this mean for U9? Well, this means that Vegeta and Nappa (and possibly Gorkor) will head to Earth for the Dragon Balls in a chance to get immortality instead of heading off on a suicide mission that would normally be awaiting them on Helior.

Ultimate-Perfection ha dicho:
What does this mean for U9? Well, this means that Vegeta and Nappa (and possibly Gorkor) will head to Earth for the Dragon Balls in a chance to get immortality instead of heading off on a suicide mission that would normally be awaiting them on Helior.

.
Makes sense to me that they'd choose the DBs to wish for immortality and overthrow their oppressor (Frieza in most Universes that they would've went to Earth after Raditz's death and Cooler in U9 and other similar Universe).

Chewys ha dicho:Well, we all know it's because of Frieza being concieved much later
But if we have to find logic to it, one explanation could be that they were on a private chanel... although i find difficult to imagine anything private in the Frost Demon empire.

The other, and for me more likely scenario, is that Raditz's conversation was being listened to, but diregarded as crazy talk by some random alien in a distant planet. Probably Raditz wasn't payed that much atention and only Vegeta took consideration of it.

.
I'm down with the disregarding as crazy talk theory. As for the private channel theory that I had come up with, I had basically just thought the Scouter Communication network worked like a Walkie Talkie system, CB Radio system, or police communications system where you could just switch the channels you were communicating on and could even have private communication channels that required some sorta password access or something like that. Though I think the disregarding it as crazy talk theory works better at least for a DBM setting. Now for Z proper where Toriyama later retconned it to where Raditz was seeking out Kakarot cuz Vegeta was planning a coup d'etat against Frieza, I think the private channel theory works far better.