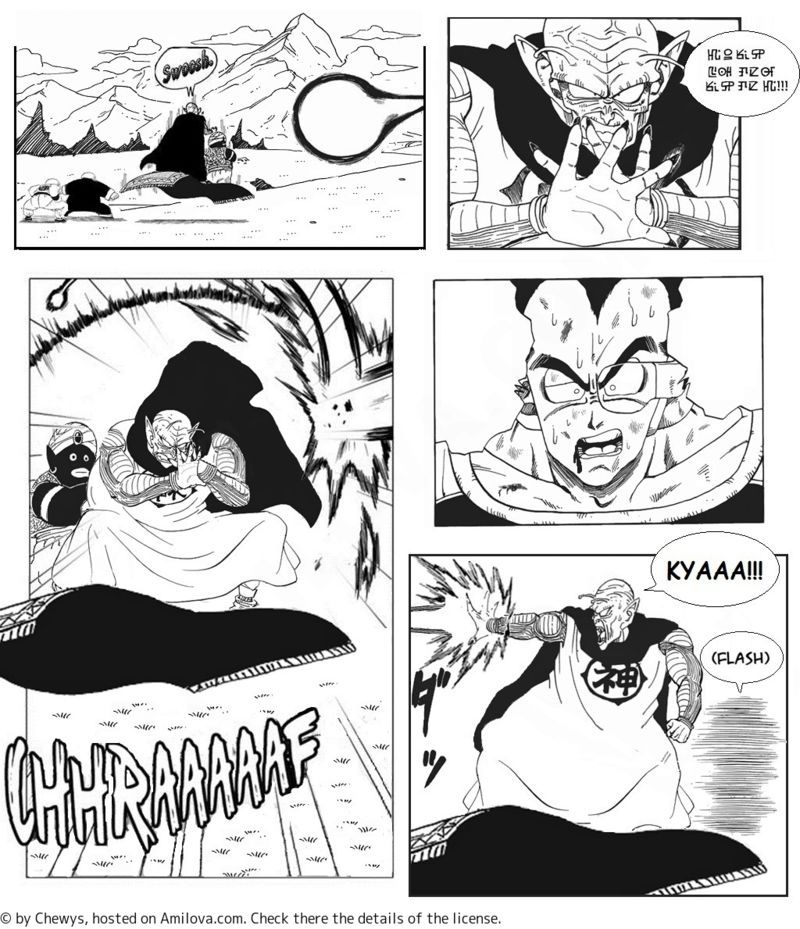 Why do you say that?

Kami's PL is higher than King Piccolo's after KP made his wish for eternal youth. KP and Goku only had a tied PL of 260 when they had their final match. Kami is supposed to be weaker than KP due to the fact that he is much older and KP inherited most of the power when the two split from the Nameless Namekian.

But, we know he is weaker than both Goku and Piccolo Jr. In the tournament... both of them are around 400 units.

So i gave Kami a Power level that was much higher than 260 and lower than 400.
Yet power levels are tricky for earthlings/namekiams: his base could be around 370 but he is already on guard when he appears here, so he may have powered up a bit.

I don't know about that. Goku's PL during the previous arc when he fought Tien Shinhan was 180, so I'd say Goku's PL at around the beginning of his training with Popo would be closer to that than the 260 he'd have at the end of his training.

Now I know PL's from the movie pamphlets aren't canon and aren't always very accurate when compared to canon PLs, but they have Nam at 100 and Ranfan at 80 and he easily defeat her. So at this point in the DB history, it would seem a mere 20 units higher is a huge difference.

Back to Goku's PL being closer to 180 around beginning his training with Popo. That could very well mean that Popo is around the 200-225 range and Kami is in the 225-250 range. I think Kami being around 250 makes more sense since King Piccolo at 260 was supposed to be stronger than Kami if I recall correctly.

King Piccolo was not stronger than Kami. At all. This is literary said by Kami against Piccolo Jr.
Piccolo Father was 260 units. And was defeated by Goku.
Then Goku was defeated by Popo.
So Popo > Piccolo father

Then Popo says Kami is stronger than him and when he appears Kami defeats Goku with a poke of his finger.

I mean, I Get Goku/Piccolo's power was above 400 at the start of Z, but not sure it was during the 23rd Budakai.

Pixel-Platypus ha dicho:I mean, I Get Goku/Piccolo's power was above 400 at the start of Z, but not sure it was during the 23rd Budakai. I always thought Kami was closer to 300 than 400.

Excellent cliffhanger! Kami and Popo had to join the fray! I really hope Popo destroys his scouter, as they saw how important it is for Raditz to communicate and to fight.
As in the original manga Nappa convinced Vegeta to interrupt their mission on another planet to get the DBs, here they should let the earthlings more time to train at King Kai's place.

Time to put an end on this.
Mr. Popo is moving fast, if he only knew he could grab Radish' tail and put an end to this nightmare... for one year.

Talking about this, if no one mentiones dragon balls, will Vegeta and Nappa eventuslly arrive just to avenge Radish? Is not something I would expect to see.

My theory is maybe that Raditz wins and returns to Vegeta and Nappa without Kakarot and since they needed a 4th Saiyan to conquer Helior (what DBM made the planet that the Saiyans were to conquer that required the aide of Kakarot), they decide to conquer Earth instead to ease Cooler's anger from having to reassign the Helior mission to other stronger soldiers (possibly even a 1-3 members of the Ginyu Force or a member of the Armored Squadron). When they arrive on Earth they find the Z Fighters alive and well and ready to fight them (Bulma revived them at some point using the DBs, but not until they'd already trained with King Kai), which makes Vegeta assume Raditz lied to him about finishing them off. Vegeta as a result immediately kills Raditz and along with Nappa he fights the Z Fighters.

Can't answer this without giving spoilerd

Well it's a good thing it's not a question. Though now that you've said this without giving any Spoilers, what do you think of the idea I've come up with in this theory? I'm sure you can say whether or not you like it without confirming or denying that this is somewhere along the lines of what you've planned.

I feel bad for Raditz, he has been through so much s@$# today. He must be thinking: " Freeza dammit, again!? Why didn't the scouter pick these guys up!?" I mean, how many people has he had to fight? Like, 9 tops! Poor guy...

Wow! In second panel, what kind of mystical language does Kami speak? Must be Namekian... or Chinese

Nono, he was having lunch when Mr Popo took him. He was eating stake.His mouth was full of meat

At this point the Z fighters in WoW terms are level 60 players fighting a Heroic level 72 end boss.

Heck yeah! I love seeing Kami and Mr. Popo getting another chance to fight. We only ever saw Kami fight against Piccolo Jr, and in the (non-canon) Garlic Jr movie.

Also, be careful Raditz. You don't want to kill the Guardian of Earth and spoil your chances of getting an immortality wish with the Dragon Balls!