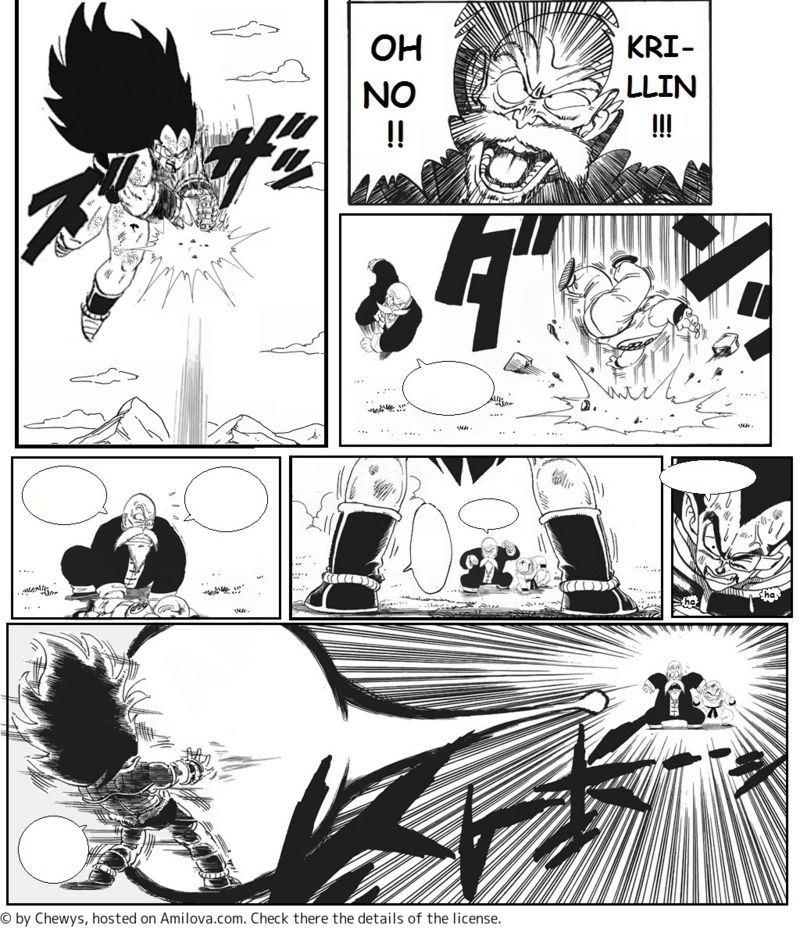 At this point the Z fighters in WoW terms are level 60 players fighting a Heroic level 72 end boss.

I think there is something wrong.
The dialogues aren't a translation of the spanish page.

Yeah, you were right. It was because of a page i intercalated. Now the site is not letting me hide this one.
So it will be two pages today

I think you are right. Krillin must have said ''I did it'' and then Master Roshi would have said something dismissive like ''It's not over yet''

I think you were referring to the previous page, Jhon :P

For some reason this page was combined with the previous one

I messed up with the translator :P

Ok... so, this page should have come on tuesday. This fight is pretty much over... we could call this Universe, U9'... it's where humans got defeated by Raditzah!!!

Jeez that scouter is resilient! I'm surprised none of them figured out that's how he's been able to dodge their attacks.
I'm waiting for one of the androids to show up honestly. Then when they find out two more Saiyans are on their way, Yamcha makes a deal with the devil to be turned into an android himself.

Yep, that scouter is made of the same material of Gohan's glasses.

The answer was no. But I wonder who's going to be saving them...?

Yamcha will save them, that or Kame will sacrifice like Piccolo with Gohan to give Krillin a chance.

Wouldn't it be interesting if Chewys plans on having our Z Warriors lose this fight and get revived later by the Dragon Balls thanks to Bulma, but just like with Goku in the original they ask for her to wait on reviving them so that they can train with King Kai? Raditz returns to Vegeta and Nappa with no Kakarot and they can't do their mission, so out of anger Vegeta decides to have all 3 go to Earth to conquer it for Lord Frieza instead of Helior. When they arrive they find all the warriors who Raditz killed awaiting their arrival and this displeases Vegeta so he immediately kills Raditz for lying about killing them. Then things proceed similarly to the original except that they've potentially had 2 years (1 year for Raditz's trip back to Vegeta and Nappa and 1 year for all 3 to come to Earth) to train with King Kai and all know the Kaioken and maybe even the Spirit Bomb too.

No easy eay out from here.
If they survive this attack and manages to counter, the only effective tecnique that I see is a kienzan. Radish is surely fatigued, but still as dangerous.

Raditz can be killed by Kami or the androïds.