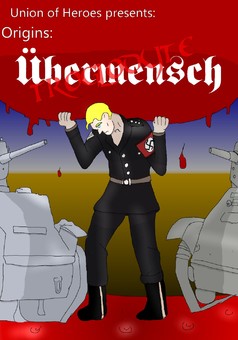 A freedom fighter lost in time.
An undying monster wanted to be forgotten by the world.
A woman following a legacy she didn't had to take.
A police man tasked by the roman gods to protect it's city.
The arch mage of the catholic church.
A duke that isn't as human as he claims.
And a woman that killed a legend.

The only thing they have in common is that they are super heroes that joined forces to protect Europe.

11 comments in other languages.

Ouroboros 11Aug гл3 стр1 There is no super hero world without Nazi's is there? The Great War and the economic depression that followed thereafter had we (...)

Ouroboros 6Mar гл1 стр17 I could have waited to post this next month having a buffer.. but as this comic is now more populair for the moment.

Ouroboros 9Dec гл1 стр15 The planned update this week has to wait... My personal pc has broken down.

Ouroboros 12Sep гл1 стр13 Thinking about it. Maybe it was better if i spread the conversation out in 3 pages. But i would slow the story down drastically. (...)

Ouroboros 27Jun гл1 стр7 Dutch Triva: Urk is a fisher city at the East of the nortner Lowerlands part of a province in the netherlands that was only est (...)

Average of readers per day: 63