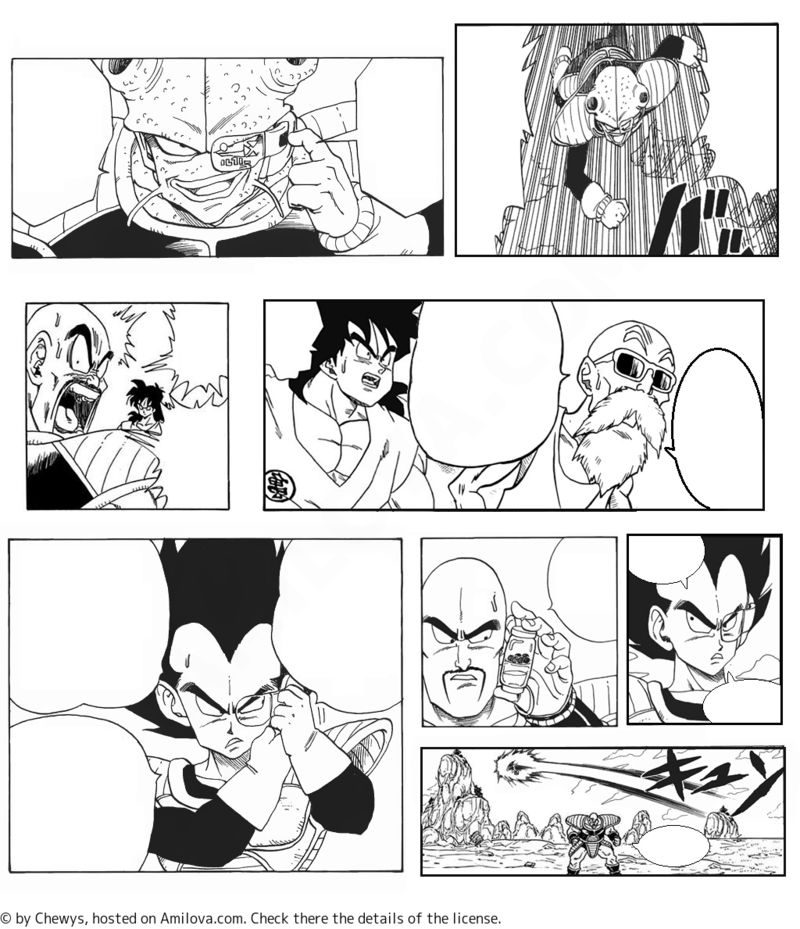 Go get him 'Geets!

So Vegeta can't kill Kiwi right now. If he does, that will confirm he's commiting treason.
I'd imagine he'll attack Kiwi once he sees Krillin, Tien and co returning to life. That will have confirmed the Dragon Balls exist and if Kiwi reports that to Cooler Vegeta won't have a chance to make his own wish with the Dragon Balls. µµ

Althoug I never understood why Kiwi is so excited antagonizing Vegeta while he still has his tail.

and since shenron juste granted a wish, the dragon balls will be stones for a year... and since there is no picollo here Vegeta may not understand he could go on Namek

Well U18 Crilin destroyed four Saibamen alone and he was far weaker than U9 Yamcha. and Roshi. So the Saibamen shouldn't be a problem.
I'm curious about Vegeta and Kiwi. Is Vegeta stronger here? He could be, he is under Cooler's rule and not Freeza's and that could mean he fought different battles...
Well we will see...

Well using that logic of different battles it's entirely possible they could have stronger Saibamen here too ya know.

I just love this scenario, can't w8 to see that nappa+saibaman vs cheated rochi and yamcha fight :p

Yes, thank you, DBZ:Elsewhere is my favorite DBZ fanmanga, I will sure check it out!

Woah!! Thanks Boom!! That marvelous Dodonpa made my day... how much stronger do you think that demon was?

Tien would have been proud of that beam

Well weaker than a super saiyan, since Yamcha is way above them and he still doesnt stand a chance against super saiyan Goku. Although he's getting there with his kaioken times 40.

I think we'll see some kaioken in the next chapter! After all they where trained in the Kaio Style by Yamcha.

And Barracks was cool as hell, throwing his arm back at the guy who just turned it to stone. Brilliant. Where was this guy in the Boo saga xD Imagine Gohan doing that to Dabura in their fight. The entire arc would have been over.

Kiwi! Good change to have a different fight!