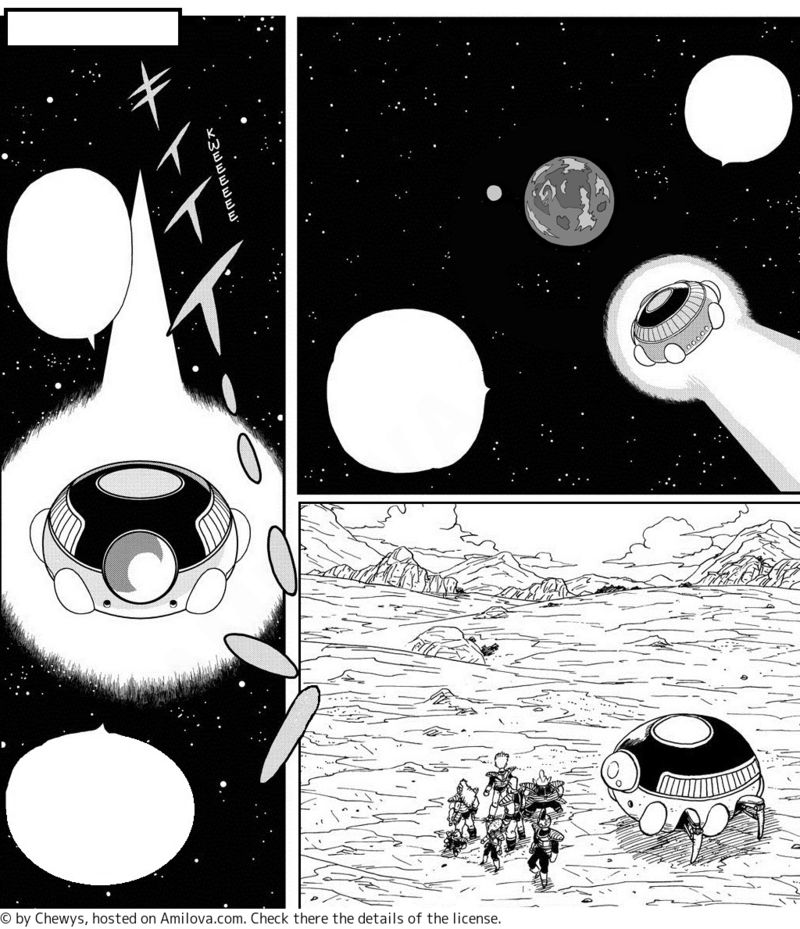 Yamcha will get some target praktisch

That planet doesn't look like Earth. If I'm right that it's not Earth, then I'd imagine that Raditz might've been ordered by Vegeta to disable the tracking of him via his Scouter on the previous planet he was sent to conquer and to make it seem like he'd eliminated most of life on that planet before he did so.

It's either that or Chewys' couldn't find a suitable image of Earth to use for this purpose so he used a different planet image he found somewhere.

Hahaha, you are right, it's the last one Kor

I thought so. I figured it would be weird for you to not be able to find a suitable image of Earth viewed from outer space, so the only logical explanation was it was the previous planet he had been on before he visited Earth.

They are on earth Kor.

Well, it´s changed. Truth is i hadn´t bothered :P
Thanks for the observation

I see. Well now that's cleared up. Well then I guess what Ouroboros said is true then that Yamcha now can take out some cannon fodder soldiers.


but maybe too small ?
for me i don't care ^^ this will not change how cool your fiction and work is

This is getting interesting. Looks like the low level squad that Raditz mentioned actually picked up the intelligence gathered from his battle on Earth.

They might be close to Raditz's power level, but I assume that Yamcha and Master Roshi are now strong enough to deal with them after drinking Kami's Divine Water.

This would give some good exposition on the progress of their power levels. Hopefully Kami will actually train with the two of them and gain a strength increase as well!

Interestingly, this invasion is sure to attract the attention of earthlings around the world. This will now help attract more warriors into the Z ranks, as well as training for Roshi and PRO Yamcha. It was pretty [clever, to include several characters such as; Hercules] [Mr. Satan, King Chappa, Yajirobe, Pamput and Ranfan (the only WOMAN).

And you can put nonhumans like the Giran dinosaur monster, and creatures from beyond the grave like Akkuman, Dracula Man, Invisible Man, Mummy Man (Grandma Uranai's Warriors). Without seeming free or unnecessary. You can also see if they even trained or evolved, not to mention that the King of the Earth will ask to help the heroes who defeated Piccolo Daimaoh once again, THAT can change the relationship, universe more from now on.

Dude remember that devil guy from Dragon Ball? He can kill everybody xD

His name is Akkuman is a demon from Hell who works as one of Grandma Uranai's fighters. Even having low fighting power he has a deadly technique that is capable of destroying any mortal creature. This technique is the "Deadly Splendor of the Devil", it causes the evil contained in the hearts of individuals to grow and destroy them, exploding them. Only those with a pure heart are immune to this technique.

I would really love to see Kami and Haarp play a more active role in defending Earth, being the only Namekians on Earth.

Since King Piccolo was never defeated into spewing out the egg containing Piccolo Jr, their race is at a disadvantage right now. Being only an elite class Mutant Namek offspring instead of a reincarnation of Piccolo, Haarp doesn't seem to have as much potential as Piccolo Jr. Hopefully by training with King Kai, he can overcome this weakness.

Without any pure-hearted Saiyans like Goku or Gohan, the Earthlings would have an incredibly tough time defeating enemies beyond Super Saiyan-tier. Maybe Kami would be forced to take a more active role in U9 by training, possibly regaining his eternal youth and fuse back into the Nameless Namekian? He would actually be able to defeat most enemies that are below Perfect Cell-tier.

Finding an alternative like Kami fusing would just be a repeat of universe 3. And we will see how that plays out someday.

Not really, they (the Z Warriors) even though Majin Boo is released would not lose (AT LEAST NOT MISSING), they could appeal to the Metamoru fusion (dance) or the Potara fusion (earrings), the dance multiplies the users' power for each other, it doesn't add up, it multiplies so it's so powerful.

Prior to this his hidden powers can be unleashed by Namekusei's GURU, or Old Kaiohshin (Rō Kaiōshin) although it is almost certain that he will not be released before the MULTIVERSO tournament in DBM. Not to mention that they can use Master Mutaito's creation technique of MAFUBA (Mafūba), then simply wish that the container used to hold the creature be sent to the nucleus of the UNIVERSE HOTTEST star and Majin Boo would die instantly because it would turn to dust in a micro second.

See, a clever and far more useful strategy, although they (WARRIORS Z) could get even more overpower if THEY seized Akkuman's "Deadly Splendor", this technique multiplies the evil in the opponent's heart until it explodes, nor a mortal who does not have a pure and good heart can survive it.

Yes, it is a story about the Earthlings. I just really like Kami as a character, and he really came in well to help against the fight against Raditz. It's sad to see him become quickly irrelevant in another Dragon Ball series since Namekians have such unique abilites. The Saiyans really overshadowed everyone in Dragon Ball Z.

The Earth in U9 will need all of the help she can get. No Saiyans means they will struggle a lot more with greater threats without teamwork.
Having a Guardian of Earth that takes more responsibility in saving his planet would be really neat.
We are already seeing this happen by Kami not just training one martial artist at The Lookout like Goku, but all of the Turtle School and Crane School disciples. Kami also made Mr. Popo interfere to stop King Piccolo's elite children from re-releasing him from the rice cooker; there is also Kami and Popo fighting Raditz as mentioned earlier. Kami only interfered once in canon by fighting Piccolo Jr in the 23rd Budokai, as well as coercing Tien to kill him to stop Piccolo after he beat down Goku.

I thought it would be neat to see a role reversal of U3 by seeing Kami fuse with King Piccolo or another Namekian, but having Kami as the base.
Chewys has taken a lot of creative liberties by not following exactly what Salagir has envisioned in his version of Universe 9.

Kami wouldn't be Kami anymore though, he would allow his darker desires back into his heart, just like how u3 Piccolo eased up on the earthlings due to his conflicting fondness for them after fusing.

But yeah, he definitely stepped up his game here, but that's only natural I think.
Kami only stepped in when he saw that Raditz would win against the z warriors, in Z, that never happened. And we gotta give props for that. He may not be a perfect guardian, but he does his job well when the situation really calls for it.

kami wouldn't be kami anymore though, like how Piccolo gained "good intentions" Kami would gain "bad intentions". He'd "allow his darker desires into his heart again".

And that's assuming Piccolo would even agree to it.