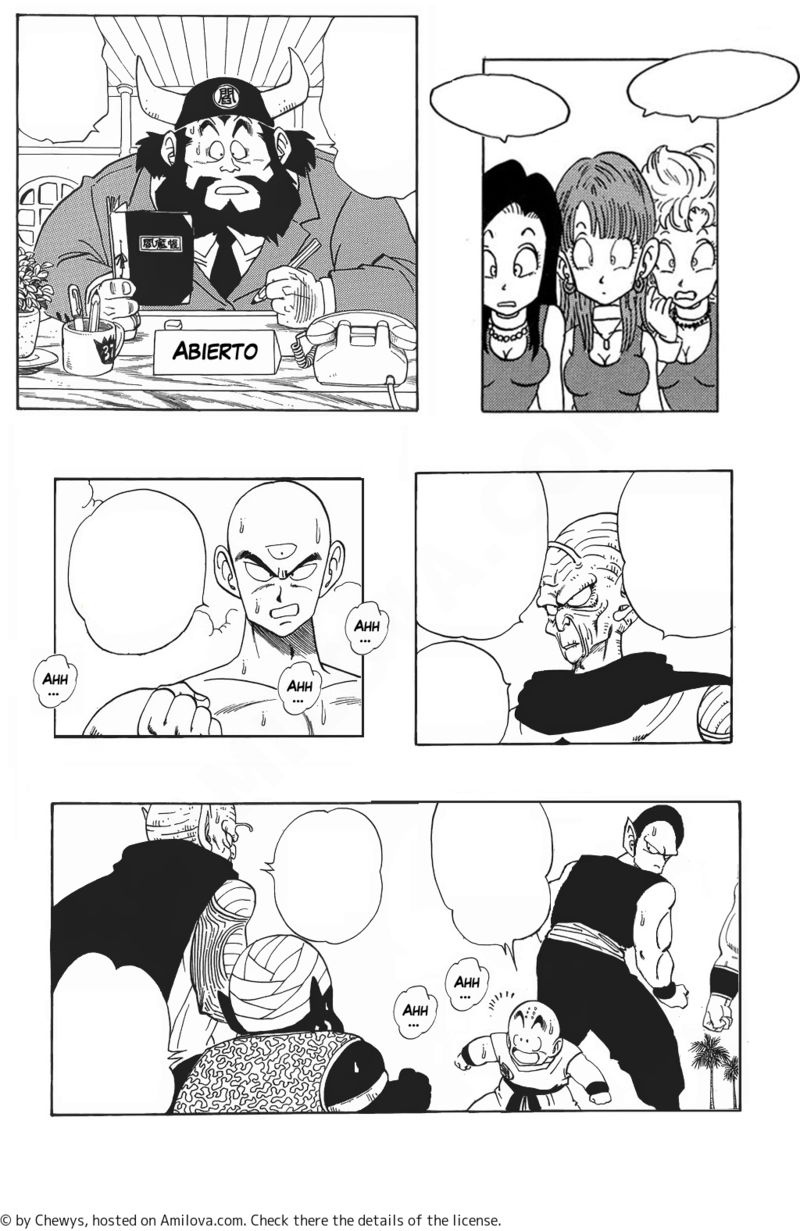 They're using the magic carpet huh? That IS a nice idea Mr. Popo, indeed.

...It's official, Goku makes everyone dumber by existing

It really is nice to see Kami and Mr. Popo have a more active role in U9 when compared to canon. Although we do have the nice convenience already knowing the story in advance. Popo’s magic carpet wasn’t introduced in DBZ until after the battle with Vegeta if I recall correctly. Think of it as a sort of retcon in a way.

Plus none of the Z-Warriors in U9 are able to ride the Flying Nimbus due to their hearts not being completely pure. The only one who could ride it is Gohan, and obviously he is dead now. Popo’s magic carpet will be their best bet to head over to where Yamcha, Bulma, the Saiyans and Cui are since they will just waste more energy by flying since the Flying Nimbus isn’t usable to them.

As for Goku making everyone dumber, I don’t necessarily think that is the case. Goku was simply a pure hearted warrior who was able to overcome nearly every obstacle thrown at him. He was seen as a savior and an inspiration, and his friends sought to catch up to him rather than purely surpass him. Without the presence of Goku, the Earthlings will have to go above and beyond their limits to save their world.

And from what we’ve seen already in canon and from Chewys’ story, the Earthlings can easily catch up to Goku. Every Earthling surpassed Goku and the villains of the previous sagas (King Piccolo, Raditz, Vegeta, Ginyu Force) except for Frieza and beyond.

Humans have all the potential to be powerful fighters; but they just cannot do it as quickly or use the same methods as a Saiyan can.

About Goku being a positive tool or negative hindrance to humans, and I have to disagree with you, Goku makes his friends weak, and stupid too, because he doesn’t train with them, Goku doesn’t encourage them to be better, it makes them inferior, let them dependent on him, but at the same time do not worry about leading them.

Goku and selfish to the extreme, let's be honest Goku has stopped being naive since he grew up and became an adult, he really is an imbecile, and he doesn't care about others, the Sayajins are not able to empathize with other living beings like humans, Vegeta and Goku demonstrate this, but, this is due to their biology, the Sayajins are selfish and individualistic to the extreme, Akira Toriyama himself said that Goku is not a hero, and acts more like the sociopath.

Now, the advantage of the aliens against the Terrans, more specifically the Sayajins, is the ability of the Human Apes to possess the Zenkai, because every time they recover from serious injuries they gain more power, this is the form of giant ape that they can appeal, since in the form of Oozaru the fighting power is multiplied by 10X. HOWEVER, Earthlings have better ki control, the ability to develop better techniques, and also gain more power in much shorter periods of time.

First of all I clarify that I speak Spanish and I am using the google translator, so sorry for the spelling errors

Well, we do all agree that humans had great potential and that they were overshadowed by the Saijajin (and even a namekuseijin like Picoro). Regarding Ultimate Perfection I would add that they only had a part of Goku's training and curiously always after him when an enemy appeared that required superior training (when the humans trained with Kami and obtained the power to defeat the Saibaiman - which were just as strong as Radizt- they had to face the Saiyans and when they were Kaiosama -King Kai- Goku already did it and trained with a gravity chamber). So they had the potential to fight but they did not obtain it not because they took longer to progress but because they did it late and to add that there were training sessions that they did not do as gravity or in the room of time.

About what Tulio says, let's be honest, the mistake was made by Toriyama that left them relegated to the other Z warriors, the Saiyans including Goku prioritize the emotion of a good fight and are individualists, he is right (it is verified by leaving Vegeta and Frieza alive to fight again, putting the lives of his friends and the Earth at risk).

In the anime several times they say how they felt relieved to have Goku (like the chapters before the Cell tournament in which Krillin admits it) but also reaching the degree of frustration at not having such power (like Yamcha in the movie of Bojack upon discovering that Gohan and Picoro would fight). So while Goku is true that he is interested in the well-being of his friends and family, he has flaws and is an obstacle for the other Z warriors to grow and I would dare to say the same of the Saiyans.

But let's be fair but to be dazzled by the power of Goku they could continue training to overcome their own limits as Tien, of the Z (humans) was the only one who continued training Krillin concentrated on family life and Yamcha simply quit, so the humans were partly to blame