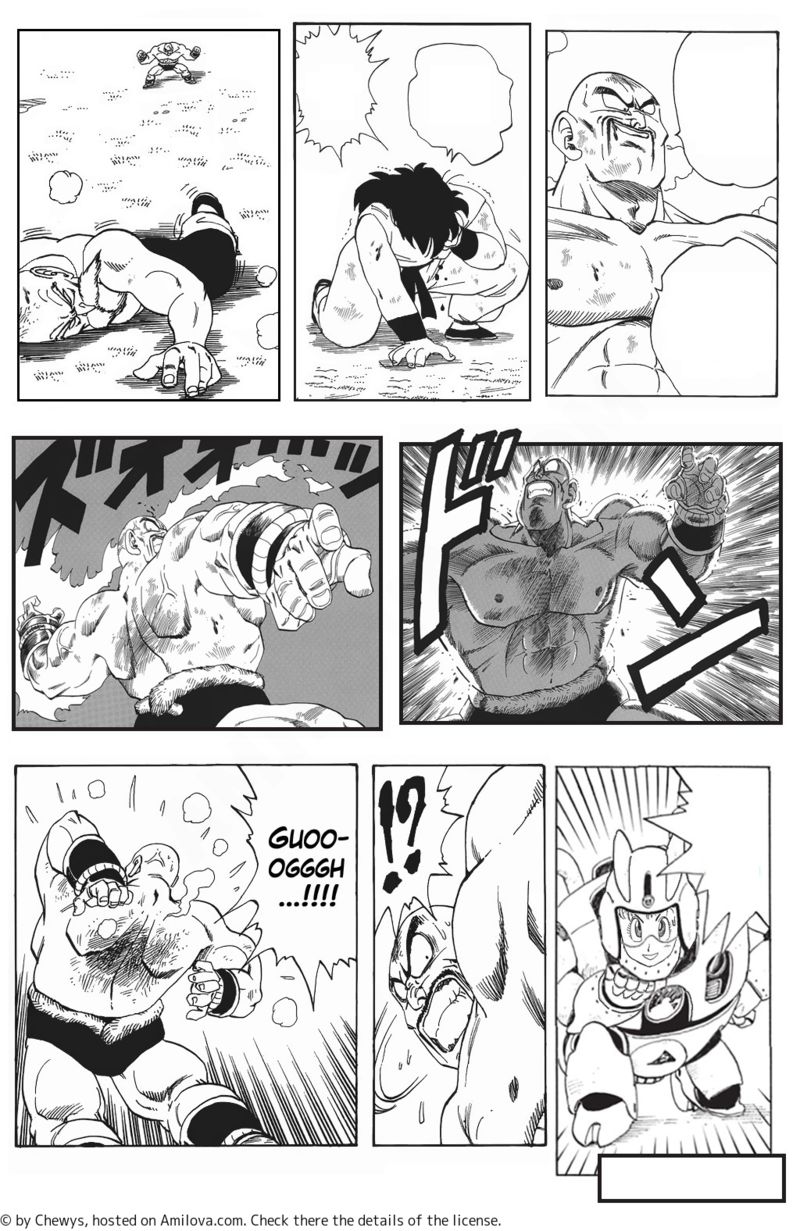 The funny thing is, Kiwi could have warned him, as Kiwi has a scouter, he would have detected Bulma's blast building up before she released it.

Today must be like a movie for Kiwi, first he calls Vegeta a midget and gets away with it, he trashes Vegeta, then,as far as he knows, leaves him to die a slow painfull death, then he gets to take out all his racism on Nappa, who can't fight back (unlike Vegeta), then he gets to watch Nappa get ambushed without warning him just to be a dick.

Today isn't a good day for a Saiyan, but it sure as hell is for Kiwi! (so far at least)

Hahaha, totally, i was going to add some jerk moment about Kiwi not telling Nappa.
He sure is having a blast.

U9 Bulma is best Bulma xD

And I do wonder why Dr Gero would never attempt to kidnap Bulma, as she's apparently capable of building machines that can hurt people like Nappa.

He could kidnap her and use her to advance his android project further. Since they are the smartest people on the planet and we know he eventually gets his hands on her husband, so why not go the full swing and kidnap her too? Mayby he never got the chance, or he tried and failed.

I see him being too much of a dick and too proud to work to someone as his equal...
But he will have an asistant here...

Next page is a special page ("a filler" let´s say) so i thought "ah, da hell, i´ll just publish saturday´s page to day".

So that armour... is from one of the commanders in Red Ribbon, right? Just curious

Ahhh, i was gonna ask you all on saturday... where is that armor design taken from?

That was wrong... I was thinking of the Battle Jacket Staff Officer/(rapidly promoted) Commander Black used, but it's a different design. Maybe it's the Path to Power redesign, but I don't remember if there was a manga of it or not...

Doesn't seem plausible because bulma never was able to build such a suit in main timeline, even though earth was given same amount of time to prepare for the saiyans.

Also doesn't make sense whyd she put herself in danger like that. I'm sure if she had tech to make such high powered armor, she can implant it with an AI (which can probably fight better than she can while controlling it) while watching from safe distance. Even modern US army is starting transition to unmanned force.

I get what you say, but her husband was never on the line like that before (yeah, Vegeta was, but by that time he was waaaaayyyy stronger than anything Bulma could have imagined to build). Here she knows more or less the level of her husband since he is training at her home. And even as a little girl she had already build a laser able to kill even the likes of Jaco. So it´s not like she doesn´t know how to do it, given the right motivation she has here (it´s her family on the line after all).

About putting herself in danger... we are talking about the girl who went all alone in a search for Dragon Balls, who faced the Red Ribbon, who went to Namek, who went to meet Freezer, yeah, Freezer, cause she hadn´t been able to see him in Namek... so i see it perfectly plausible. Also if they lose it´s the end of the Earth, so, it´s to die now or to die a bit later.